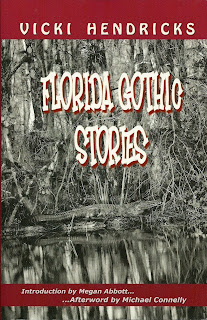 No one does noir like Vicki Hendricks. She writes about Florida like Daniel Woodrell writes about the Ozarks. And like Woodrell, she’s practically created her own noir sub-genre, deeply rooted in the cultural history and environmental specificities of her locations. Florida’s flora, fauna, and sport, however, are more than just colorful backdrops. Hendricks repeatedly uses animals (iguanas, dolphins, gators) and nature (ocean, swamps, jungle) as metaphoric counterpoints to her characters, their desires, and their dilemmas. The Florida habitat is an organic place for Hendricks to locate recurring themes such as sex and danger, instinct and adaptation, purity and corruption. Not surprisingly, these are also some of the dominant themes of noir.

Florida Gothic Stories collects 11 of Hendricks’ stories, and includes an Introduction by Megan Abbott and an Afterward by Michael Connelly. Hendricks opens with a bold and gutsy choice, “Stormy, Mon Amour,” that throws the reader headfirst and without warning into Hendricks’ dominion. The very first paragraph describes the birth of a child that was the result of a human and dolphin mating. Like I imagine one must do with sky diving, you just have to hold your breath and jump. And in the case of “Stormy, Mon Amour,” you’ll be glad you did. The story is about the forbidden love affair between a woman fed up with her scummy boyfriend and the dolphin she idealizes. But when you get right down to it, the relationship isn’t so different from any of the doomed romances from classic noir. Instead of the impetuous male falling for the femme fatale, it’s a desperate woman falling for the "dolphin fatale." 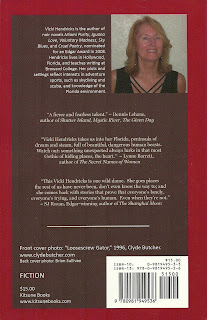 Hendricks has a gift for writing about the extremities of human desire in heartbreakingly sympathetic and understandable terms. However bizarre the stories may at first seem, the characters' decisions are motivated by very normal emotions. “Stormy, Mon Amour” is not about shock value or grotesquerie; instead, it's about a lonely dreamer who longs for freedom, love, and to take control of her life. Those are feelings that any of us can relate to.

Hendricks’ characters are on the fringe of society, but they dream of stability and affection—and sometimes just good sex. In pursuit of these dreams, however, they often go to such great lengths that they let fantasy overtake reality. Impulsive and illogical, their own desires are the designs for their downfall. In “Boozanne, Lemme Be,” a burglar sacrifices his steady existence living in unoccupied houses for the love of a reckless woman he meets at a bar. Alcoholic, obese, and domineering, “Boozanne” is anything but the stereotype of an ideal lover; but in her, Hendricks locates an intense physicality and lack of inhibitions that complements the burglar’s modesty. And therein lies his undoing: he finds exactly what he was looking for, only to realize that it’s not good for him (to say the least). Such irony befalls many of the characters in Florida Gothic Stories.

One of Hendricks’ recurring themes is the danger of turning a fantasy into reality. Two quotes from “Stormy, Mon Amour” best exemplify this:

“I have no idea how much muscle it’ll take. But I have no choice. I tell myself I can do it. I will do it. It’s right.”

This conflict plays out in a number of stories. In “M-F Dog,” a clever story with a comic twist, a waiter whose love life is as abysmal as his writing career buys a dog in hopes of improving his luck with the ladies. In “Cold-Blooded Lovers,” an adjunct professor fed up with his wife thinks he has found the perfect mate in his pet iguana; and just like Emil Jannings in Josef Von Sternberg’s The Blue Angel, he goes beyond reason in pursuit of an impossible relationship. And in “The Big O” – perhaps the best story in the collection – a runaway mother fleeing an abusive relationship lays low in a trailer park in hopes starting over; despite her every effort, she incessantly finds herself ensnared in yet another hopeless situation. “The Big O” best exemplifies Hendricks skill for devastating empathy and compulsively compelling characters. It’s impossible not to follow her protagonist every doomed step of the way.

There’s something to enjoy and admire in each of the tales in Florida Gothic Stories. “ReBecca” is a quick-witted and surprising story of twin sisters joined at the head, one of whom is head-over-heels in love with a pet store clerk but too timid to act, and the other who is brash enough to make the first move but who lacks an object for her affection. And the closing story, “Sweet Dreams,” is a tragedy with echoes of James M. Cain about two elderly women who plot to kill a hobo in hopes of collecting the insurance money. It’s a smart and fond homage to Double Indemnity, but there’s nothing cute about the protagonists’ misfortune.

Noir is about failure: learning to live with it, that is, if one is lucky enough to first live through it. Hendricks’ protagonists go through a lot of hell—much of it self-inflicted—but they’re tough and determined. And dreamers though they may be, they don’t give up on those dreams very easily.

Florida Gothic Stories is available in print from Kitsune Books, or as an eBook from Top Suspense Group.

Here are some of my favorite quotes from the stories:

“Our lives would be a fantasy come true, if we didn’t have to beware of the rest of the world.” (“Stormy, Mon Amour”)

“I thought I’d seen everything and survived it – and I was fucking sick of it.” (“Must Bite!”)

“Life is cruel, babycakes – survival of the fittest….You gotta protect yourself – be cruel first.” (“Gators”)

“I knew her life without having to live it, casual cruelty and then the injury that changed her whole future. I could land in her place easy, trapped with a kid, no job, and a bastard of a husband that thought he was God.” (“Gators”)

“Hell, if it was my trash, I’d have just left it there too. That’s the way I was, always dragging my ass, till teeth were in it. I couldn’t say shit about anybody else. I fit right in.” (“The Big O”)

“I didn’t create the evil in the world, just one action in a lifetime of it.” (“Sinny and the Prince”)
Posted by Cullen Gallagher at 1:43 PM