As part of The New School's Noir Festival, four scholars gathered together to celebrate the centenary of one of the greatest arch-villains of all-time: Fantomas. He started off terrorizing France in 1911 and continues to appear around the world in a variety of formats: books, tv, movies, comics, animation, paintings. You name it, and Fantomas has probably left his mark on it. 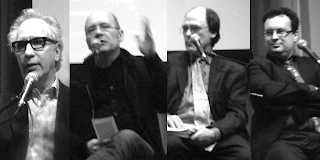 David White (Fantomas in America) started things off with a roughly 45-minute selection of clips from Louis Feuillade's 1914 serialized version film of Fantomas, which was recently restored and released on DVD. After a healthy dose of burglaries, kidnappings, death-defying escapes, explosions, and even someone getting trapped in a church bell (don't ask -- just watch and find out for yourself), White returned to the podium for a comprehensive overview of all things Fantomas. He began with the original serialized novels by Marcel Allain and Pierre Souvestre, their method of splitting the two main detective characters (Juve and Fandor) between the two writers and working independently, as well as how they dictated instead of handwriting the novels. White then followed the trail of the supervillain Fantomas and the relentless pursuit of Juve and Fandor across the 20th century, from movies by Feuillade and Fejos to Mexican comic books to 60s television series and even Turkish remakes. Phew! That Fantomas, he sure gets around. 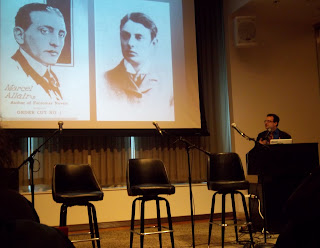 David White discusses Fantomas' authors, Allain and Souvestre.
Next up was screenwriter and novelist Howard A. Rodman who spoke about the mystique and appeal of Fantomas. Rodman concentrated on the motiveless crimes of Fantomas, which made him all the more impossible to pin-down, and his menace all the more pervasive. Rodman also highlighted the many disguises used by Fantomas, which made it seem as though he could be anyone, including the reader.

Following Rodman was Luc Sante (author of Low Life, as well as a terrific essay on tough guy character actors called "Rogues Gallery"). Sante compared Fantomas to Lex Luthor, and the writing methods of Souvestre and Allain to the automatic writing of the surrealists. He also emphasized the "documentary impulse" of Feuillade's film, which was shot on-location in Paris and Marseilles. He concluded by pointing out how Fantomas appeared shortly before WWI, and then reappeared right before WWII. "The entire 20th century is contained somewhere within the myth of Fantomas," Sante said.

Last was Geoffrey O'Brien, author of the essential book on vintage crime fiction Hardboiled America. O'Brien started out by saying how Feuillade's movies are, in a way, more faithful to the myth of Fantomas than the books themselves. By this, I took it to mean that Feuillade's film was such a perfect adaptation that it began to supersede its source over time. This partly relates back to what Sante was calling "the documentary impulse," but also speaks to the iconic status of the images of the movie, something touched on by all of the speakers. Another point O'Brien made was that Feuillade, while best known for his crime films (Fantomas, Les Vampyres, Tih Minh, Judex), was not primarily a director associated with that genre. He began in historical and mythological topics, and then later comedies with child stars. One can see bits of each of these genres in his crime serials. After his crime period, O'Brien stated that Feuillade primarily made sentimental melodramas. One of O'Brien's points was that this shining creative period for Feuillade was, in some ways, serendipitous, as much a product of chance, luck, and timing as his haphazard entrance to the film world. 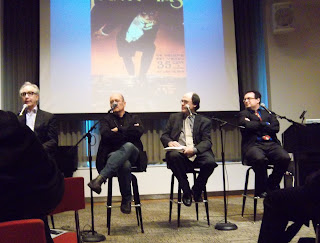