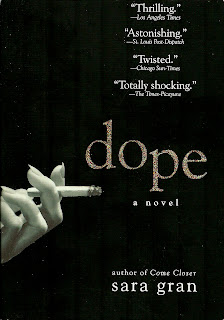 There’s an element of Greek Tragedy in Noir. Fate is unavoidable; the past is inescapable; disguises never fully mask one’s true self; skeletons never stay in the closet; and journeys always reveal that which would have better been left buried. Towards the end of Dope, junkie-turned-amateur-sleuth Josephine Flannigan reflects on some of the unpleasant discoveries of her first case. “Sometimes, if you’ve been unlucky enough to find out the truth, you’re better off forgetting it. Especially when there’s not much you can do with it.” She doesn’t realize how right she is. By the end of the novel, Josephine will have wished that she took her own advice early on.

B-girls and drug addicts are nothing new to noir novels, but Sara Gran’s Dope gives us a rare look at the world of 1950s New York through the eyes of someone who is normally relegated to bit parts and colorful cameos, someone who has seen the best and worst of life but has rarely been allowed to share her vision. 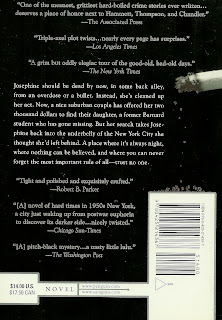 Josephine Flannigan has been many things in her 35 years on this moral coil—and most of them she did in order to get the dope that her veins craved—but one thing she’s never been is a Private Detective. But when two concerned parents offer her $2000 to find their dope addict daughter, Nadine, Josephine thinks it will be a quick and easy buck that will put her life on easy street. She didn’t know how wrong she was.

Dope is populated by castaways who washed up on the island of Manhattan and never found a rescue—except for alcohol and drugs. Like the nine circles of Dante’s Inferno, Josephine’s investigation leads us through a hierarchy of despondency that lies beneath the veneer of New York City. The bars and dance halls get progressively more sordid depending how badly the men need the women and the women need the dope to get through the day. And waiting at the bitter end is a terrifying twist colder than one could imagine.

Sara Gran writes with both force and reserve. There’s nothing romanticized about her portraits of the slums, seedy bars and drug dens of post-WWII New York. They’re desolate and full of despairing people whose problems are bigger than they, or society, know how to deal with. Her characters aren’t standard types but living, breathing, hurting – and craving – individuals. With each new person Josephine encounters, there’s the intimation of a whole other story just waiting to be told and for someone to listen. And that’s what makes Josephine such an insightful (and much needed) narrator: her life experiences have conditioned her to know where to look, who to listen to and, most importantly, what to listen for. “That’s why you start, and that’s why you stick with it, so you can finally be someone: a junkie.” Where others see junkie stereotype, Josephine sees the ghost of what was and what will never be again.
at April 25, 2011