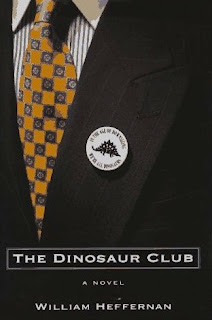 Abandon all hope all ye who enter corporate America...or so it seems to Jack Fallon when rumors of downsizing and layoffs start to spread. As the 49-year-old Vice President of Sales for Waters Cable Corporation, he knows that he and other people in his age bracket are the targets of downsizing. But with his personal life falling apart, his wife leaving him for a wealthy dentist, his kids blaming him for the separation, and his mother’s incessant nagging, Fallon decides to strike back. With the aid of his fellow middle-aged colleagues, Fallon forms “The Dinosaur Club,” a covert group that sets out to terrorize the top brass at Waters Cable Corporation. Even if they go down, they’ll go down fighting.

William Heffernan's The Dinosaur Club was published in 1997, but its prescient story could easily apply to the contemporary economy and the financial worries that many are still facing today. It is about workers who are afraid of losing their jobs, and the greater fear of what life will be like when they have to start over. Heffernan also blends comedy with darker elements of revenge fantasy and mid-life crisis. We cheer on as Fallon and co. make their own investigations into fraud and other illegal activities going on behind-closed-doors, and especially as they figure out the perfect poetic justice to deliver to the ruthless, cocky executive Carter Bennett who is behind the layoffs.

But if we laugh along side them, we’re also never sure if The Dinosaur Club will succeed. The troubles they go through are real, and the pressures felt ones that many can relate to. How to pay for their kids’ university tuitions and nursing home fees for their parents, and how to sustain a marriage frayed by work stress that followed them home from the office. It is joyful to watch Fallon flirt with the younger, attractive company lawyer Samantha Moore, but we can’t help but wonder if this is just part of a mid-life crisis, and will it too just come to pass?

If there is anything positive about Fallon’s turmoil, it's that it woke up him from a mindless existence of routine. He lost control of his life long ago and became what others expected of him. Fallon's realization offers a hint of optimism amidst what would otherwise be a dour, hopeless situation. I appreciate that Heffernan sees the possibility of a light at the end of a tunnel. Who knows how long that tunnel may be, but such hope from a socially perceptive writer such as Heffernan is certainly encouraging.

Here is one of my favorite passages from the book, which captures Heffernan’s outrage at the ruthlessness of corporate America:

“I see them laying off hundreds, thousands of people, and I wonder what the hell is going on in their minds. Isn’t anyone saying: Hey, wait a minute, if we all do this, who the hell is going to buy our TV sets and our cars and our toasters? Where’s our talent pool going to come from when all those families can’t afford to send their kids to college anymore? What’s going to happen to our economy when those kids grow up and are never able to buy a house? And you know what’s even sicker? Nobody’s asking those questions. Not even guys like me.”
at April 29, 2011