Catching Up with Vertigo Crime: "Noche Roja," "Rat Catcher," "Dark Rain," "The Green Woman," and "A Sickness in the Family" 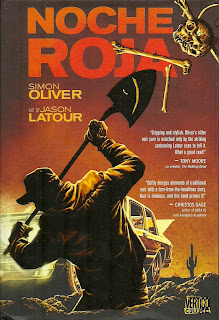 Spinetingler recently announced their nominations for Best Crime Comic/Graphic Novel of 2011. Two of their nominees came from Vertigo Crime: Jon Evans and Andrea Mutti’s The Executor and Mat Johnson and Simon Gane’s Dark Rain. Both are highly recommended graphic novels. On the occasion of their nominations, Pulp Serenade is looking back at some of the recent Vertigo Crime offerings.

-------------------------------
Noche Roja, written by Simon Oliver with art by Jason Latour, heads south of the border for a strong dose of socially conscious noir. Eleven years ago, Jack Cohen was a border cop, but something happened that made him quit and has haunted him ever since. Now he sells burglar alarms back in the US. But when he is asked to go back into Mexico to investigate the brutal murders of six young women from the maquiladoras, Jack finds himself knee-deep in the vice and corruption he tried so hard to leave behind. In his own words: “Eleven years of letting the past kick me in the balls. And it ain’t over yet.”

The horrors of Noche Roja are uncomfortably real and familiar. Political corruption and human exploitation are sad staples of daily news reports, and Noche Roja reminds us of the personal tragedies and human cost that is often obscured by cold headlines and objective reporting. Simon Oliver’s prose is unflinching and unsentimental, and the halftone-style of Jason Latour’s art mimics the texture of newspaper photos, reminding of the real-world connection of the story that lies in every panel. 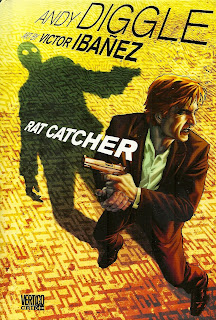 Rat Catcher is another realist graphic novel in the same vein as Vertigo’s excellent The Executor (which still stands, in my opinion, as the best in their lineup thus far). The book opens in the Badlands of West Texas where an FBI safehouse is burning to the ground. A key witness in a federal case lay dead in the house, the latest in a series of assassinations attributed to the mythical “Rat Catcher.” Stumbling out of the flames is a man with a bullet hole through his shoulder. He’s the only one that knows the whole story, and Special Agent Moses Burdon won’t give up until he’s caught the mysterious survivor.

Author Andy Diggle and artist Victor Ibanez have crafted a blistering thriller as ruthless as the desert sun. Rat Catcher has the pacing of a top-notch action movie and explosions and shoot-outs to rival anything on the modern screen. If any of the Vertigo Crime titles should make it to Hollywood, Rat Catcher gets my vote. 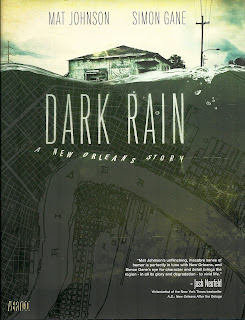 Written by Mat Johnson with artwork by Simon Gane, Dark Rain is a post-Katrina story of crime and redemption. Dabny Arceneaux used to be a customs officer and Emmit Jack used to be a bank clerk. They both got caught with their hands in the till and were sent to prison where they were cell mates. Now that they’re out of jail, they’ve got no hopes for employment. But when Katrina strikes New Orleans, the pair see an opportunity to get revenge and get rich.

Simon Gane’s artwork is boldly stylized in blue and grey, washing out the color boundaries between the characters and drowning them in the same river of human tragedy. Mat Johnson’s story skillfully balances an exciting heist story with a moving, compassionate portrait of the devastation wrought by Hurricane Katrina. Amidst such harrowing circumstances, Johnson and Gane show both the worst and best aspects of people. As Dabny says, “We can do the wrong thing. But at least we can try and do it for the right reasons.” Morality is rarely black and white. Such ambiguity is perceptively captured by the writing and art of Dark Rain. 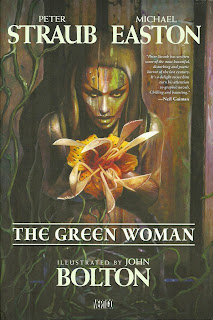 Peter Straub and Michael Easton’s The Green Woman features radiant artwork by John Bolton. The story belongs to the world of Straub’s “Blue Rose Trilogy,” which includes Koko (1988), Mystery (1990) and The Throat (1993). Not having read those, The Green Woman was very disorienting for me to read. Perhaps fans of Straub’s would find more of interest in its story about a serial killer hiding out in a haunted tavern and the cop that is tracking him down. 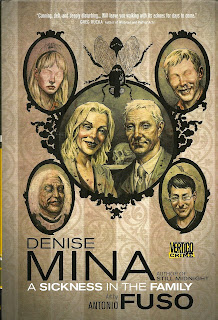 Denise Mina's A Sickness in the Family, with art by Antonio Fuso, is a macabre family portrait as grisly as it is funny. The Ushers comes into a large sum of money after the sale of the family business. As greed starts to corrupt everyone fantasies, family members begin dying in uncannily violent ways. Among the most original and distinctive books in the Vertigo Crime family, A Sickness in the Family delights in exploring the darkest recesses of the Usher household, and its story goes in many surprising directions.

Gordon Harries, over at Needle Scratch Static, wrote a terrific review of A Sickness in the Family: “Denise Mina and Antonio Fuso’s neo-gothic is, for my money, the best graphic novel that Vertigo Crime has yet published. It is dark, violent, funny, profane and profound about the psychological hinterlands that our families tend to occupy. Not only will it, as Greg Rucka promises in his blurb ‘leave you walking with its echoes for days to come,’ you’ll find yourself marveling over a clever (seemingly throwaway) line of dialogue and re-assessing the book’s content every time you think of its ending. It’s that good.”
at April 03, 2011