"Murder on the Aisle" by Ed Gorman 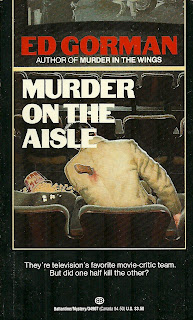 For those who like movies as much as they like murder, Ed Gorman’s Murder on the Aisle is a dark delight. Think Day Keene meets Siskel and Ebert. The book mixes a classic, Gold Medal-style plot about an innocent man accused of murder and blends it with some funny and spot-on cultural commentary, as well as some of the most rancorous characters I’ve encountered in Gorman’s novels.

Tobin and Dunphy are film critics who host the television show Peeps, “a pseudo-intellectual version of mud-wrestling.” They’re notorious for their on-screen bickering and are known to throw the occasional punch – but no one expected Dunphy to wind up with a knife in his back. Suspected of murdering his co-host, Tobin must find the real killer before the cops catch him or the scandal kills his career.

The story is cleanly plotted and the twists are never overly complicated, which allows more room for the characters to grow, and that is one of the aspects that keeps me coming back to Gorman’s work. The pretext of the murder mystery allows Gorman to explore a milieu so conniving, acrimonious, and duplicitous that one almost envies the deceased Dunphy for no longer having to take part in the whole charade. There’s nothing glamorous about this world or its petty inhabitants, but there is a lot of pain and resentment, and a lot of it feels very real. 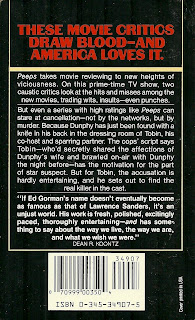 Part of what makes the book so much fun is how accurately Gorman gets the New York film scene. His descriptions of the critics and their pretensions still holds true today, as does his description of film students (trust me, I’m one of them): “If there is a group more insular and arrogant than film students, it is still in the experimental stage and has not been mass-released yet.” Tobin’s tastes don’t earn him a lot of fans, and it’s fun to argue and agree with his different opinions throughout the book. He takes John Sayles over John Hughes, Nicholas Ray over Michelangelo Antonioni, Richard Corliss over David Ansen, and Chuck Norris over Sylvester Stallone.

Murder on the Aisle also has what I’d like to nominate as one of the best pickup lines of all time: “Do you like In a Lonely Place?” I’m not sure which is better – that Tobin uses Nicholas Ray’s movie to hit on a girl, or that the movie he picked is so filled with doomed relationships that anyone who knows it should sense another failed relationship on the horizon. (Or perhaps that Dorothy Hughes' source novel is about a man who stalks and kills women. Either way, it's not the right foot to start any romance on.)

Broken families, of both the personal and professional variety, occur throughout Gorman’s books, from his first, Rough Cut, all the way to his latest, Stranglehold. Marriages collapse, spouses cheat, colleagues betray, businesses fall apart. Gorman uses these themes to explore how reprehensible our own actions can be. His protagonists are never innocent victims, and are well aware of how they’ve screwed up their own lives as well as those around them. What redeems his main characters is that, after causing so much pain, they don't explicitly try to hurt others anymore, and instead try to put themselves in places where their loneliness will keep others safe. After four failed marriages you don’t see Tobin running off to get into a fifth. It might have taken a while, but he’s learned something about himself. As Gorman describes Tobin, “He missed seeing his children, and thought of his dead father, and worried in a dumbstruck way that he was just as shallow and amoral as he sometimes feared.” This self-awareness is part of what makes his protagonists so relatable and likable. Gorman’s not an idealist, but that doesn’t mean he rejects ideals – he’s just down to earth and recognizes humanity for what it is. 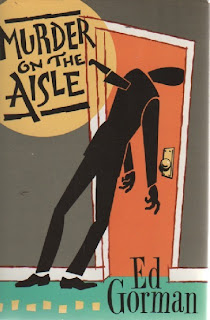 In Gorman’s world, there’s something noble about professionalism: dedication, craft, and courtesy. Tobin doesn’t always have it, but that’s one of his failings, and Gorman doesn’t easily forgive him for it. Tobin’s not surprised when a colleague is eager to try and squeeze himself into the television show only days after Dunphy was killed. Tobin is, however, genuinely surprised when another colleague offers to help get him assignments in his magazine, if the show should ever get canceled. That small, sincere gesture opens Tobin’s eyes more than any of the corruption he uncovers in the course of his investigation. Those small but human touches are some of the fondest moments in Gorman’s novels.

Some writers would turn this story into a concept mystery or a one-note parody, but Gorman doesn’t let that happen. The cultural references aren’t superfluous but serve to flesh out Tobin’s character and show how dicey his reputation is with audiences. As we’ve come to expect of Gorman, his characters are maturely crafted and full of surprises. Gorman also resists the temptation to let the story become too fantastic and implausible. Even his sex scenes (which too many authors let run wild and ridiculous) show a rare sophistication. After going to bed with a young woman, Tobin wakes up to find her aloof and staring out of window, and after breakfast she treats him less like a lover than a substitute father. The fantasy never lasts in Gorman’s books: reality always kicks in at the wrong moment, but those are the moments that make the stories ring true.

Murder on the Aisle was originally published in hardcover by St. Martins in 1987, and in paperback by Ballantine in 1989.

Two of my favorite quotes:

“No,” he said. “People never are what you expect, are they?”

Posted by Cullen Gallagher at 6:14 PM