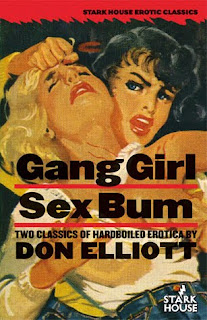 Stark House Press delivers two more overlooked classics from the paperback treasure chest. Gang Girl and Sex Bum and were originally published under the name “Don Elliott,” a pseudonym which has since been attributed to its rightful owner, the legendary Robert Silverberg.

Silverberg’s introduction to this volume, “Those Good Old Soft-Core Days,” is a absorbing and insightful remembrance of the paperback publishing industry in the late 1950s and early 1960s. While it’s a very personal (and quite humorous) personal history, Silverberg’s intro also captures a significant piece of literary history that is overdue for attention. Books like Tropic of Cancer and publishers like Grove are often referenced when discussing American literature and censorship, so it was really fascinating to read about the Nightstand and Midwood books and the role they played during this time period. Even if Gang Girl and Sex Bum don’t sound like your cup of tea (but hey, don’t judge a book by its cover), Silverberg’s essay is highly recommended for anyone interested in the history and evolution of American literature. 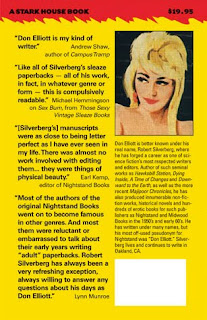 As for the books themselves, Gang Girl and Sex Bum offer finely tuned thrills and impressive, dynamic craftsmanship. Silverberg was only in his mid-20s when he wrote these, but already he knew how to churn out sleek, vigorous novels at a rate that would break most writers back, if not exhaust their creativity. 2 or 3 novels a month, and sometimes 4. For five years. Let’s give Mr. Silverberg a round of applause. 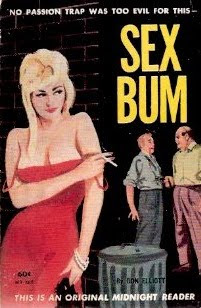 Of the two novels, I liked Sex Bum best. It was originally published in 1963 by Midnight Readers. Set in upstate New York, it’s about a cocky delivery boy with his eyes set on the big city. Seeing an opportunity to get in with the local mob, he makes a name for himself during a poolhall fight and starts working his way up the ranks, and where he stops no one knows. This is a novel of ambition and comeuppance, and Johnny Price is like a backwoods Icarus. There’s lots of smalltown gangster flavor, and Silverberg achieves a nice balance of suspense and humor. 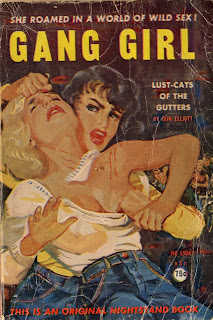 Gang Girl (originally published in 1959 by Nightstand) was Silverberg’s second book as “Don Elliott.” It’s a juvie crime novel about Lora Menotti, a sixteen-year-old girl whose parents move her from the Bronx to the Lower East Side in hopes that she’ll clean up her act and leave the gang life behind her. Instead, she takes up with the local Cougars, and begins to work her way to the top of the pack. The teenage angst displayed in the book isn’t so different from Rebel Without a Cause, and while nothing could be more different from my life than Lora Menotti and the Cougars, it’s hard not to understand their need to rebel against family, school, and society. More shocking than the sex today is the level of violence in the book. The fights are gritty and merciless. As a warning to some readers, there is a rape scene that is quite disturbingly depicted. It’s that scene that actually made me think about the book in a different way and recognize how powerful Silverberg’s writing actually is, if it can still provoke this strong a reaction fifty years later.

Closing out the volume is a terrific Afterword by Michael Hemmingson called “Sin, Softcore and Silverberg,” which puts the novels in context.

Stark House has been on a roll in 2011 so far. First was Peter Rabe's The Silent Wall/The Return of Marvin Palaver (reviewed here) and Jada M. Davis' One for Hell, already in the works for later this year are trios from Harry Whittington and Day Keene, as well as an Orrie Hitt double.