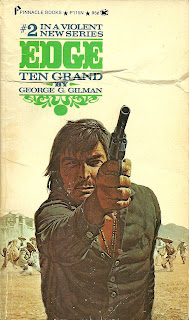 After avenging the murder of his brother in The Loner, Josiah Hedges—aka Edge—returns in Ten Grand (alternately known as Ten Thousand Dollars, American). George G. Gilman (Terry Harknett) opens the novel with a great duel between Edge, armed only with his iconic razor, and a rattlesnake. For those unfamiliar with Edge, the battle tells you everything you need to know about his character: he’s faster, more cunning, and more deadly than even the desert’s most natural fighter, the rattlesnake. And he’s got that razor hidden in a pouch around his neck. That razor is his best friend and everyone else’s worst enemy.

A group of Mexican bandits led by El Matador have raided the town of Peaceville, Arizona where Edge was temporarily installed as sheriff. The bandits took all the money in the bank, and they took all of Edge’s hidden loot as well. They’ve also taken him hostage, as well. Edge could care less what happens to the town, or Gail, the woman he was seeing. He does, however, care about the money that was stolen from him, and about exacting revenge in the most brutal way possible, and about those rumors of $10,000 hidden somewhere down in Mexico… 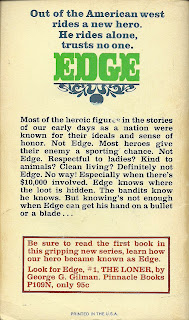 Readers of Gilman’s Edge series know that cover’s promise of “a violent new series” isn’t false advertising. The heroism, chivalry, and strong moral center of the classical Western have been replaced by brutality, savagery, sadism and an almost nihilistic belief that all sins must be paid for in flesh and blood. Mounds of flesh, and bucks of blood. And most of it freshly cut by Edge’s sharp, unerring razor.

The Edge books may not be for the faint of heart, but that doesn’t mean they aren’t without a sense of humor. Edge has pithy, Bond-esque one liners, such as when he says, “Hey, don’t get cut up about it,” after slicing open someone’s throat. There’s also suggestions of screwball comedy in Edge’s rapport with Amy, a girl from Maine who finds herself alone in the desert:

“What’s your name,” Edge asked as the woman approached.
“Amy,” she answered.
“Pretty, he said, holstering the Remington. “Don’t match your looks.”
“What’s yours?”
“They call me Edge.”
“It suits,” she told him shortly.

Screwball, it may be, but don’t expect any Katherine Hepburn/Cary Grant romance from Edge and Amy. The way their “meet cute” ends is anything but “cute.”