"The Dead Man: Face of Evil" by Lee Goldberg and William Rabkin 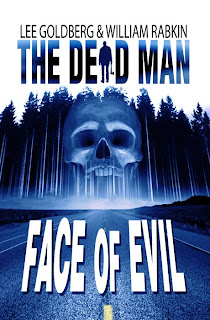 With The Dead Man: Face of Evil, Lee Goldberg and William Rabkin have inaugurated what looks to be a promising new genre-bending series of novellas. This first entry introduces us to Matthew Cahill, a lumberjack whose life seems pretty stable—he has a good job, his childhood friend Andy still acts like a buffoon, and his colleague Rachel has been flirting with him (but he still misses his wife). But after a skiing accident, Cahill’s life takes a nightmarish turn, and now he’s questioning everything he sees. Are those rotting corpses he sees walking amidst the living? Cahill doesn’t know what is going on, or who he can trust.

Like any good cliffhanger serial should, Face of Evil smartly hooks readers with a number of mysterious elements that remain unsettled at the end of this first adventure. I, for one, am already anticipating the next entry in the series, Hell in Heaven (also penned by Goldberg and Rabkin).

If you check out The Dead Man blog, Lee Goldberg gives the backstory of the series, which began as a television pitch. This episodic structure seems to have influenced the novels, as Face of Evil reads much like a pilot episode. It offers plenty in the way of atmosphere, suspense, and action, but little in the way of answers, which is why you have to tune in for the next episode.

So, what makes me want to check back for the next installment? Matt Cahill, for one. The book begins with a stable character, one described as “a practical man, not one for pondering the philosophical meaning of things. He took events as they came.” The book ends a man who is now questioning everything around him, even his own perceptions. He’s still pragmatic, something every action hero should be (to some extent). Cahill’s character is just beginning to evolve, and I’d like to see where Goldberg, Rabkin & Co. are going to take him.

There’s also a good amount of humor in the book. When Matt gets overwhelmed by the nightmare spinning around him, Matt’s instinct is that “he needed to chop some wood.” And as soon as he gets out of the hospital, regardless of how screwed up everything is, he still wants his two hotdogs. Humor is an organic part of his character—a sign of his pragmatism—but it’s also a clever counterpoint to the supernatural craziness that is only just beginning to build. Also, I am hoping that soon Matt’s axe skills will be used on something other than logs.

A third reason that I’m looking ahead to the other books is the lineup of authors in store for the future. More of Goldberg and Rabkin, plus James Reasoner, Bill Crider, Mel Odom, Matthew P. Mayo, Harry Shannon, Marcus Pelegrimas, David McAfee, Joel Goldman, James L. Daniels, Burl Barer, and Matt Witten. That’s one hell of a lineup in store for The Dead Man, and I’m looking forward to seeing what sort of hell they can drag Matt Cahill through. These writers span any number of genres—horror, crime, mystery, western, and more—so I am curious to see how this diversity will affect the evolution of The Dead Man series.

Purchase The Dead Man: Face of Evil here, or visit The Dead Man Blog for more info.
at March 11, 2011