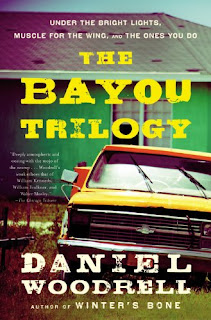 Sometimes an author writes his own best epithet. In the case of Daniel Woodrell, he says it all in this one brilliant, reticent snatch of dialogue:

Let me back up a few paces and give it some context.

Towards the middle of The Ones You Do, the third and final book in Daniel Woodrell’s The Bayou Trilogy, a homicidal gambler named Lunch finds himself stuck in Natchez, Mississippi. While he is waiting for his car to be fixed, he takes a walk around the town. He looks and ponders at the sights and sounds that surround him: the land, the river, the birds, the people, their stories. Lunch comes across a leaflet about the local Natchez Trace landmark. Specificity is Woodrell’s stock in trade, and no detail reaches his page by accident. So, when Woodrell points out that Lunch reads this leaflet twice, he means that we should pay close attention to what it is that he is reading and how he reacts.

“John Thompson Hare, the hoodlum, was among the first who shrewdly saw the possibilities of banditry on the Trace. The Trace made him rich, but moody. In its wilderness he went to pieces, saw visions, was captured, and hanged.”

The man on the next bench said, “It’s got a bizarre history that’s awfully attractive.”

“Our forefathers,” Lunch said, “were a ragged bunch.”

“Oh yeah, buddy,” the man said. “The dudes down here in historical days were truly some rough cobs. No doubt about it. 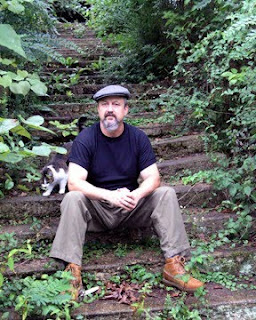 The Deep South. Crime. Wilderness. Ambition. Impulse. Promise. Prosperity. Pursuit. Killing. Failure. Family. Sadness. History. The more you look at that passage, the more themes emerge from between the words, between the lines. These are the fabrics of Woodrell’s Bayou Trilogy, which he weaves into a beautiful and incomparable tapestry of crime fiction, cultural history, and just damned good storytelling.

The Bayou Trilogy (Mulholland Books, 2011) comprises three early novels by Woodrell: Under the Bright Lights (originally published in 1986), Muscle for the Wing (1988), and The Ones You Do (1992). They are, respectively, his first, third, and fourth, novels. Each is set in St. Bruno, Louisiana and feature police detective Rene Shade and his family, friends, and enemies (often there is little distinction between these categories). Though they each could stand to be read on their own, it is a far more rewarding experience them collectively and chronologically, as they not only chart the development of the characters, but also the growth of a major writer. Beginning with the first book, Woodrell is refining a distinctive thematic and stylistic approach that only gets better with each successive book. 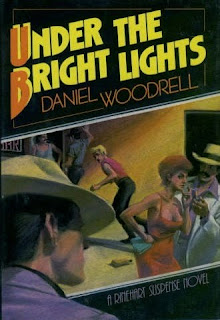 Under the Bright Lights introduces us to Rene Shade, a police detective whose colleagues don’t trust him because his brother, Tip, runs a local bar where the local criminal element dwells. Tip and his clientele distrust Rene because he works for the law. Shade’s other brother, Francois, works in the DA’s office, and is more willing to “play ball” than Shade. Family is crucial to Woodrell’s world—the mysterious bonds that tie people together, and the equally mysterious divisions that keep them apart. Shade’s family is a microcosm for St. Bruno, which is itself sort of a microcosm for Woodrell’s larger worldview in which the moral boundaries between good and bad, right and wrong, friend and foe, family and stranger, are blurred beyond recognition. Once again, a quote from Woodrell is the best way of explaining the relationships of his characters:

“A sort of fond sadness meandered through Shade. It was partly because he loved his brother and knew him perfectly, partly because he did not know him at all. The unlighted chamber where one’s true and most secret longings and convictions are housed has a door that is impressively sealed. The more you turn the knob and peek through the keyhole, the more you have to guess, and the less you know.”

Under the Bright Lights also introduces us to The Swamp, which is to become a powerful metaphor in each of the novels in The Bayou Trilogy. “The key to the swamp was to agree with it, accept the way it was.” As the Trilogy progresses, and Rene finds himself deeper enmeshed in a morally ambiguous world, he finds that indeed the only way to navigate life is to “accept the way it was.” One can’t fight one’s family forever; neither can Rene. It’s a lesson that, even at the end of the series, some of his relatives are still learning.

Structurally, The Bayou Trilogy follows a rough but consistent pattern: a dynamic, dramatic opening crime that sets the story in motion, followed by a prismatic exploration of all the players involved. The duration of the stories is often quite short—sometimes days, other times mere hours—but Woodrell’s pacing is a decided contrast. Woodrell has the pacing of Robert Altman—a keen patience for letting characters speak, allowing them to hang out and grab a beer (and finish said beer) before moving on with the story. Woodrell and Altman find their greatest insights in those moments between the actions. It may be frustrating at first, but once you get on board and let them manipulate time in their own way, the rewards are seemingly endless. 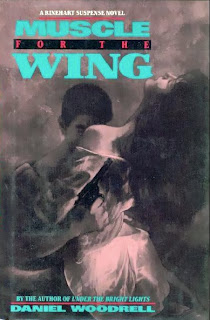 Under the Bright Lights saw Rene Shade investigating a political murder as an officer of the law. Muscle for the Wing finds Rene moving further from the black-and-white morality of the Law. Here, he is asked unofficially to find a group of renegade robbers who held-up a high-stakes poker game and killed an off-duty officer. In exploring two types of political power—the “official” law versus the “unofficial,” corrupt law that manages things behind the scenes—Woodrell evokes some of the spirit of Peter Rabe, though the two obviously have very different styles and are, at least on the surface, writing about different things.

Woodrell writes about a detective caught between two moral poles, whereas Rabe writes about a mobster who wants out (Dig My Grave Deep) and an off-his-rocker racketeer (Kill the Boss Good-By). But when you get down to it, are Woodrell’s Ozarks any different from Rabe’s syndicates? Both authors are writing about about imperfect characters navigating imperfect worlds and, in a way, about locating humanity in some of the most unlikely of places. The backwoods bayou of Woodrell’s novels is—at least to me—as foreign a world as Rabe’s gangland, yet the power relations and pressures to conform are instantly recognizable. Individualism is key to both writers, and their stories are as much about the dire need for individualism in the modern age as much as they are about the price one pays for remaining true to oneself.

In Muscle for the Wing, a big-shot criminal kingpin asks, “Detective Shade, do you understand the world you live in?” Rene’s response: “No, I don’t. And neither do you.” There’s something philosophical in Shade’s words that recalls Socrates’ famous declaration: “As for me, all I know is that I know nothing, for when I don't know what justice is, I'll hardly know whether it is a kind of virtue or not, or whether a person who has it is happy or unhappy.” Rene also struggles with these same questions of virtue and justice—especially justice. Jadick, leader of the hold-up gang, says, “We’re going to use this town to get even….That’s what everybody really wants, is to get even.” Meanwhile, the Mayor wants this to be an “unofficial” investigation because the justice he wants isn’t exactly legal. Caught once again in the middle, mediating two amoral poles, is Rene Shade, an imperfect man for imperfect times, and one hell of a compelling character. 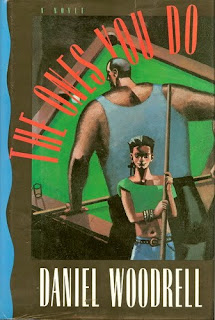 Woodrell saves the best for last. The Ones You Do is a masterful conclusion to The Bayou Trilogy, a book that not only brings Rene Shade’s story full circle, but also epitomizes the stylistic and thematic innovations that had distinguished the series from its beginnings. Rene Shade is on probation from the police department, Tip still runs the Catfish Bar, Francois is the Assistant DA, and their mom still runs a pool hall. And then one day their estranged father, John X. Shade, shows up, bringing along a daughter they never knew existed. However, what John doesn’t tell anyone is that he is on the run from a gambler to whom he owes a great deal of money.

John might not tell the whole truth, but there’s certainly a lot of honesty to some of what he does say. This particular line (which is told to Rene) is one of the best in the whole anthology: “Honesty can siphon off a few regrets and resentments if you tap into it. Let that sink in.” Fatalism is a recurring theme in all three parts of The Bayou Trilogy and this line, for all its brevity, is a rather profound and sage suggestion for how to deal with it. These three books seem to be saying that crime is just as natural a part of life as the swamp, even if it is a little on the nasty side. You can ignore it, or try and fight it, but it will always be there. Sitting at the bar. Waiting for you at the dinner table. It’s there in bed next to you when you go to sleep, and it kisses you when you wake up the morning. Unless, of course, it punches you in the face, which sometimes happens. You just gotta’ deal with it. It’s not easy, but that’s what Shade is learning how to do. Take it from him.

If the detectives of yesteryear, like Philip Marlowe or Mike Hammer, were like knights, descendants of chivalry trying to clean up the streets in their own way (Hammer seemed to require large quantities of blood), then what does that make Rene Shade? He’s someone that lives with crime the way that Marlowe and Hammer never could—or would. Crime is part of Shade’s blood. It’s part of his family, part of his community, and—as he learns—part of him, as well. There are hints of this as early as Under the Bright Lights, but it really takes the full cycle of all three novels for his character to fully emerge in ways that even he wasn’t prepared for. This is one of the benefits of reading all three of them.

I could gush on and on for umpteen more paragraphs, and I’ve already one on much longer than anticipated. Somehow, I actually imagined that I could write about all three novels in under five hundred words. I was wrong—by about 1300 words and counting. So, I’ll conclude the review by being blunt.

The Bayou Trilogy is more than a landmark of crime fiction; it is an impressive and important addition to American letters. Bravo, Daniel Woodrell, and long live Rene Shade.
at March 23, 2011