"Cold Shot to the Heart" Interview with Wallace Stroby 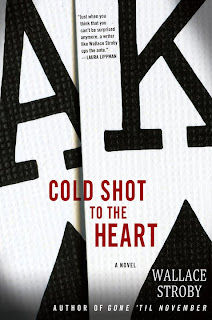 Wallace Stroby kicked off the year in crime fiction with a knockout. Cold Shot to the Heart is as gripping as it is because Stroby matches a riveting heist scenario with volatile and electric characters who never let the pace slow, not even for a second. The story revolves around two characters whose paths – and guns – are about to cross.

Crissa Stone is a professional thief as intelligent as she is cunning. She plans things perfectly, never takes an unnecessary risk, and always walks away clean – and always with the money. But with her partner-in-life-and-crime behind bars, she needs a hefty sum to pay off the right people to ensure he gets paroled. When Crissa accepts a job knocking off a high stakes poker game, little does she realize she's about to run up against Eddie the Saint, a real live-wire, coldblooded killer just out of prison. He's getting in touch with his old partners, collecting debts, and figuring out how to get back on top – and stay there.

Meticulously paced and inventively plotted, its ensemble cast of well-rounded, compelling characters that really takes Cold Shot to the Heart to the next level. Over the years (decades, really), there's been a trend in crime fiction of one-upping the levels of violence and psychopathy. Stroby doesn't walk down that path, though to be fair Eddie the Saint does his share of killing, and he's plenty psychotic. But what makes his character so menacing isn't always what he does so much as what he won't do--and as the story unfolds, you realize there's very little that Eddie won't do. The ambiguity of his limits, and his proven determination, make him unpredictable and unstable, as well as so captivating to read about. Balancing the tone of the novel is Crissa, who is the opposite of Eddie – she's got her warm, human side, as well as her cold, calculated mind when it comes to business. She also has clear lines she will not cross. However, she's also just as determined as Eddie, and so as the plot thickens and things begin to go wrong, Stroby reveals her vulnerable side, and the question arises of how far she'll go to fight back in order to save herself and her loved ones.

Jed Ayres, who (for my money) has one of the finest tastes in crime fiction, has a great review of Cold Shot to the Heart over at Ransom Notes where he calls the novel "a slick, fast-paced, straight-forward thriller with great characters."

Cold Shot to the Heart is out now from Minotaur. Check with your local independent bookstores for print editions; it is also available for Kindle.

Wallace Stroby was kind enough to speak with Pulp Serenade about his work.

Pulp Serenade: What was the genesis for COLD SHOT TO THE HEART? A character, an incident -- what was the trigger that got the ball rolling for you as a writer?

Wallace Stroby: I’ve always admired the minimalist crime writers – Peter Rabe, Donald Westlake, Lawrence Block and the like – and wanted to write something in that style. A few years back, I talked briefly with Charles Ardai, publisher of the Hard Case Crime line, about doing a project for him. Nothing came of the idea, but it did put me in mind to write a lean and mean crime novel – 55,000-75,000 words – that would be sort of an homage to some of those books I read and loved. At the same time, as in GONE ‘TIL NOVEMBER, I wanted it to be about a female protagonist, someone who was struggling to make her way in a man’s world.

PS: I read in another interview that for GONE TIL NOVEMBER you didn't use an outline. Did you also not use one for COLD SHOT? What was the process of constructing the novel?

WS: I never outline. I like to have an idea of who the characters are, what the story’s going to be, and roughly where I want things to wind up (though that always changes). Once I know all that, I feel confident enough to start writing, and what happens along the way happens. That’s the exciting part – the leap of faith that things are going to work out. Unfortunately, it’s often counteracted by the looming fear that they won’t.

My friend Mark McGarrity, who wrote mystery novels under the name Bartholomew Gill, liked to quote Ray Bradbury on that subject: “Sometimes you have to jump off the cliff, and build your wings on the way down.”

PS: As a reader, first lines are some of my favorite parts of books, and you start things off with a bang. "Three minutes after she walked in the front door, Crissa had the manager and two clerks facedown on the floor, their hands bound behind them with plastic cuffs." The whole paragraph is one concise sentence, one strong image. How did you settle on this? Were there other openings you considered?

WS: I’m big on first lines. I’m a firm believer in Mickey Spillane’s “The first line sells that book. And the last line sells the next.” I never feel a book’s ready until I have a first line I really like. I rewrote the COLD SHOT opening maybe a dozen times, in different variations, trying to get the cadence right.

Westlake, in his Richard Stark books, was an absolute master of that. The opening line from THE RARE COIN SCORE is one of the best in crime fiction. Cornell Woolrich was brilliant in that respect as well. And George Higgins’ first line from THE FRIENDS OF EDDIE COYLE practically reinvented the style in which crime novels were written.

PS: The heist is very exciting to read, especially the repelling bits. Did you have first-hand experience repelling?

WS: I’ve never rappelled, so I tried to glean as much as I could from internet videos and the like, though I probably should have done some more research. A friend who had a lot of rappelling experience in the Army read that scene, and was fairly critical of it. Unfortunately, his input came when it was too late to fix anything.

PS: What was the most challenging part of writing COLD SHOT?

WS: Doing research. Finding out how high-level armed robbers operate, how they think, how they interact with one another, isn’t easy. They’re not exactly forthcoming, and they’re a rare breed. I did find some useful interviews and books, and they gave me something of a glimpse into that subculture. But not a lot.

PS: How about the most fun part?

WS: Stripping the story down to its bare elements: Characters in place, check. Self-advancing plot, check. Then get it started, rev the engine and see where it goes. That can be a lot of fun.

PS: You write about music on your blog, and you were also the Entertainment Editor at the Star-Ledger for a number of years. If you were to create a soundtrack to COLD SHOT, what would be on it? WS: I usually do have a soundtrack in my head, and for GONE ‘TIL NOVEMBER I actually put together a mix CD of songs I was listening to while I wrote it, some of which made it into the book. For COLD SHOT though, mostly what I listened to was Philip Glass, especially his film soundtracks, because it seemed to fit the tone of the novel. The only actual song I had in mind was Richard Thompson’s “Love in a Faithless Country,” because the lyrics seemed to speak directly to Crissa’s mindset.

WS: Small bedroom converted into an office. Bookshelves on two walls. Huge framed print of Edward Hopper’s 1939 painting “New York Movie” over my desk. It’s one of my favorite Hopper works, very evocative. Unfortunately, when you see it with 21st century eyes, it looks like the blond usherette is talking on a cell phone.

I try to write five pages a day – usually about 1,200 words – and that seems to work for me, because it feels less oppressive. If it’s mainly dialogue, that can go pretty quick. Depending on the day and the material, that five pages could take one hour or five.

PS: In addition to being a novelist, you are also a journalist. How do you see those two types of writing as being similar or different, and do they influence each other at all?

WS: Being a journalist – especially a daily print journalist – teaches you skills I think are invaluable for a fiction writer. You learn how to organize your material, how to write on deadline, how to rewrite, the importance of making your key thought – what we called a “nutgraf” – clear. Those are all crucial.

And in another sense, a novel is the news story of what happens in the narrative, and the characters are your sources. Once you get them talking, you’re on your way.

PS: What attracts you, as both a writer and a reader, to criminals and crime stories?

WS: Not to sound too pretentious, but I think it’s two things: alienation and empowerment. The criminal has either rejected society or society has rejected them, and their alienation has led them to the point where they don't want to be part of society anymore. But instead of wasting away, they flourish. They live by their own rules, do what they want, establish their own code and accept where it will take them - including possibly prison or death.

PS: To end things, how about a more fun question -- if you had to be any one criminal from history, who would it be?

WS: None. I’m a strong believer in karma. I’d rather lead a boring life, and make all this stuff up at the desk. I occasionally get a taste of what that life must be like, either through research or talking to people who are part of it, and that’s more than enough for me. In fiction, that lifestyle can be entertaining. In real life, not so much.
at February 24, 2011