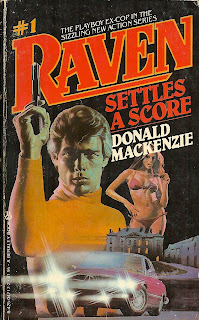 Donald MacKenzie’s series character Raven is a bit like a British Travis McGee, with a dash of James Bond thrown in. He’s a former police officer turned rogue playboy who lives on a houseboat. In Raven Settles a Score, he is contacted by Roderic Campbell, a thief who cracked the safe at the Korean Embassy looking for money but found something far more dangerous – evidence of an international drug conspiracy that many would kill to keep quiet. Soon Roderic is dodging bullets and his girlfriend is kidnapped, and only Raven can sort of this web of corruption.

Two facets raise the book above the potential mediocrity of the plot. First is the fact that before becoming a writer, MacKenzie himself was a professional thief. Evidence of his first-hand knowledge can be seen in Roderic’s character – details of past heists, and how to pick locks using the springs from an alarm clock, are among the most memorable aspects of the book. Second is that MacKenzie organizes the plot in an unconventional way that reminds of Lionel White’s Clean Break. Each chapter takes the perspective of a new character, fragmenting the narrative flow and shifting the time-span of the story. 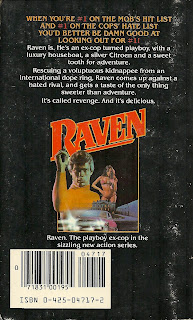 Raven Settles a Score is well paced with a solid story and engaging characters. The plot isn’t too complicated, but its simplicity makes it a little more believable, for the most part. The finale is a little fantastic – but who can blame the author for giving readers an action-packed ending to the book? Certainly not me. All in all, an entertaining read for those looking for a little mystery and action.

And now, a short quote from the book:

“Raven’s face and voice were obstinate. ‘Retribution, Jerry. That’s what it is. And I’m wielding the hammer.’”
Posted by Cullen Gallagher at 7:00 AM