"Open Season on Cops" and "The Arabella Nude" by Michael Avallone (Gryphon Press, 1993) 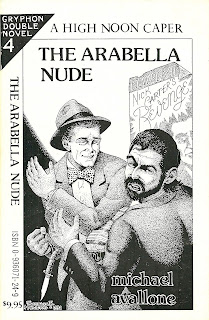 I picked up a collection featuring Michael Avallone’s "Open Season on Cops" and "The Arabella Nude" knowing little about the author, but instead on the strength of its publisher, Gary Lovisi’s Gryphon Books. Lovisi is a fine writer himself, and as a publisher he’s responsible for bringing to the public some wonderful, rare books that we’d otherwise not be able to enjoy. This two-fer was published in 1993 with two original covers (one on either side) by Frank Hamilton, in the style of an old Ace Double. Both stories were originally from Mike Shayne Mystery Magazine, and featured Avallone’s series Private Detective Ed Noon.

Both stories were enjoyable, but "The Arabella Nude" (MSMM July 1963) was definitely the better of the two. It had a fun plot, playful language, and good interplay of action and humor. Ed Noon is knee-deep in danger over an antiquarian nude statue that collectors would kill to own, but when he agrees to help Nicholas Ackademian protect the statue, Ed finds all the guns are pointed at him. Between dodging bullets from Mrs. Ackademian and ducking punches from goons, Ed gets an education in art history that they don’t teach in schools. Avallone’s narration often cracks wise, with lines like this: “There was a long silence. The pregnant kind, without babies.” Sometimes he even makes up phrases, like “I scratched Russia” – which I think means that he scratched his chin (or maybe his forehead). Even if it doesn’t, the line still puts a pretty funny picture in my mind. 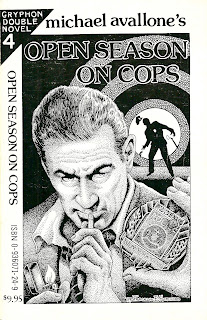 In "Open Season on Cops" (MSMM Sept 1962), Ed Noon teams up with the son of a murdered cop to find his killers. This one is more serious in tone, perhaps because of its subject matter. Its plot is straightforward, but suffers for it. A lot of the detection occurs off the page, a tactic more convenient for the writer than it is entertaining for the reader. Still, there’s a good fight at the end, and some solid hardboiled lines like this: “The shoulders, upper sleeves and rear of the tunic below the collar line looked as if someone had bombarded him with about a pound of rotten tomatoes. He had bled like a broken sieve.”

Gary Lovisi’s line of Gryphon Doubles has some great sounding rarities. You can browse through them here, but these are some of the books I am looking forward to reading in the near future: Hot Rock Rumble and Double Take by Richard S. Prather; Terran Girls Make Wonderful Wives by James Reasoner / Minesweeper by Gary Lovisi; and Carboncopy Killer and 12xZero by Howard Browne. Drop by his website and have a look around, you’re sure to find something to suit your tastes.
Posted by Cullen Gallagher at 7:00 AM