"Of Missing Persons" by David Goodis 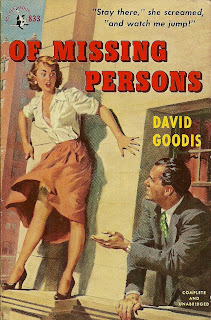 Written during his Hollywood years and based on his unproduced screenplay, Of Missing Persons would be the last of David Goodis’ novels to debut in hardcover. William Morrow & Co. originally published it in 1950, and a paperback edition from Pocket Books appeared the following year. (Interestingly enough, an Argentinean film was made based on the book, alternately known as Section des disparus or Sección desaparecidos). The story is about Paul Ballard, the head of Los Angeles’ Bureau of Missing Persons, who is on the verge of a nervous breakdown surrounding the case of Myra Nichols and her missing husband. With the newspapers pointing fingers and throwing accusations of negligence and an internal investigation underway, Ballard is ready to throw in the towel. But professional pressure and a nagging conscience make quitting a lot harder than it seems.

Of Missing Persons gets lost in Goodis’ bibliography. Stuck in between the early success Dark Passage and his PBO sensation Cassidy’s Girl, it wasn’t a hit when it first came out, and it hasn’t been reprinted since the Pocket Books edition, nor is it available as an eBook. All of which is a shame, because it is actually an entertaining and interesting book, if uneven at parts and certainly unconventional. It was written around a turning point in Goodis’ career – Hollywood wasn’t working out, and his marriage was falling apart – and you can sense a tension between trying to write a mainstream novel while still making it personal. Much of the book is more introspective than action oriented, so the attempt to write a book in a more popular vein didn’t exactly work, but the result is certainly of interest to the Goodis aficionado, and it might actually appeal more to those who prefer his early thrillers (like Dark Passage and Nightfall) to his more brooding later novels. 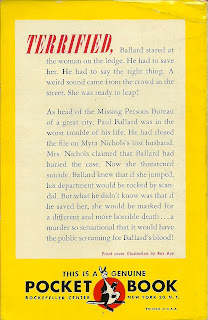 Despite Elizabeth Bullock’s criticism in the New York Times that "the first fifty-odd pages of this fine story are so slow that you may have to fight your way through them," it is actually in these pages that we can most recognize Goodis and his characteristic style and themes. Ballard is another in a long line of melancholic, depressive protagonists, and much of the first half of the book finds Ballard dealing with inner conflicts as much as external ones. He envies smoke because of its freedom to float away – but even this has nihilistic roots, because doesn’t smoke come from ruins and ultimately fade away into nothingness? Ineffectual and uncommunicative at home, he can only express himself through work. Later Goodis protagonists would be artists and musicians, but Ballard is no less dedicated to his craft. This persistence wrecks his health in any number of ways – physical, psychological, and emotional – and locks him into a Sisyphusian rut that prevents him from breaking free, even when opportunity is knocking on his door.

When the Nicholas case takes an unexpected turn, Goodis doesn’t take the opportunity to dive into the action and take the more conventional route. Instead, he delves deeper into Ballard’s emotional conflicts at home and at the office. His heated, bitter dialogues with witnesses and colleagues shows his self-hate projecting outward onto others. Readers wanting excitement will be disappointed; but those looking to burrow deeper into Ballard’s doubt and depression will find Goodis’ typically rich characterization.

Unfortunately, not all the characters are as well developed as Ballard. His wife, in particular, deserves more attention. We see her devotion to her husband, but also the damage and disappointment it causes in her life, but we rarely get indie her head like we do Ballard. Myra Nicholas also seems a bit one-dimensional. Goodis places a lot of emphasis on his main character, which isn’t necessarily a bad thing, but the novel would be improved if the supporting characters were a bit more dynamic and less conventional. 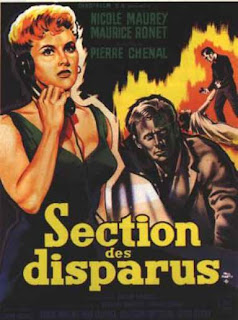 Nowhere is Goodis’ intent to write something that would appeal to wide audiences more noticeable than the Hollywood ending. You can almost hear the orchestra’s fanfare drawing the curtains to a close as the characters on-screen smile at the certainty of a happy lifetime ahead of them.

Goodis would go on to write better books than Of Missing Persons, but that doesn’t justify its critical neglect. Perhaps once Hard Case Crime gets up and running again, this might be a good candidate for republishing. Ideally, I’d love to see a compendium with both the novel and the original screenplay. That might be too much to hope for, but I can dream.

"The quiet in the office was a thick liquid, stagnant and misty, like a blocked stream. Smoke from a dying cigarette came out of the ashtray, curled its way up and flowed away to nowhere. He envied the smoke. It was free substance. It could go where it wanted to go. He couldn’t. He was chained here."

"A roach in the kitchen seemed to symbolize a sordid, hopeless road ahead, a dismal journey sloping downhill, a rut that became deeper and deeper as the years went by."

"You bat your brains out, trying to do a job. You stay up for nights at a time. You go without meals. You work until you’re ready to drop. Then you work some more. That’s what it amounts to. It’s work, work, work. Not from nine to five. But from the time a case starts until the time it ends."

Posted by Cullen Gallagher at 12:33 AM