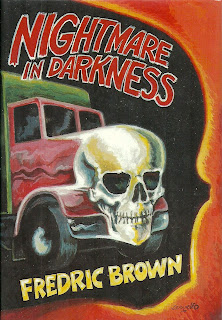 Few writers could make the bizarre seem like the natural order of the world like Fredric Brown. The strangest things make the most sense, and anything ordinary should be observed with a suspicious, untrusting eye. Volume 11 in Dennis McMillan’s Fredric Brown in the Detective Pulps series, Nightmare in Darkness (1987) is another excellent collection of the author’s matchless imagination and creative panache. Comprising vintage pulp stories along with previously unpublished pieces, as well as a remembrance by one of Brown’s children (his son Linn), Nightmare in Darkness is both entertaining and enlightening.

Linn Brown’s introduction portrays his father as aloof and enigmatic, even to his own family. Apparently Fredric would spend only two hours every morning writing – no more, no less. He speculates that Fredric could have written more (which would have provided more income for the family), but that at first he just didn’t want to. Later, Fredric was too sickly to have the strength to write. Between allergies and emphysema, he was never the image of health.

One of Brown’s specialties was the “short short,” and Nightmare in Darkness has three exceptional specimens. “Why, Benny, Why?” shows the darker side of Brown’s humor, and the cruel irony and cosmic injustice that often rules his fictional worlds. In this disturbing twist on wish fulfillment, a young woman walks home alone and discovers that sometimes your worst fears can come true. In “Mirror,” which was never published in Brown’s lifetime, the titular object manifests a man’s guilty conscience. And in the previously unpublished title story, “Nightmare in Darkness,” Brown makes one of his definitive statements on the horror of our everyday reality. That it is believed to be the last story Brown ever wrote only makes the final revelation all the more powerful. 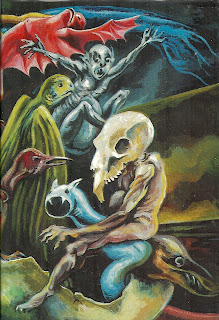 Brown also had a knack for imaginative titles, and “The Cheese on Stilts” surely rates among his best. The story is the first of three involving Carter Monk, a reporter whose nose for a good story usually winds him up in the most unusual predicaments. This one finds Monk at the scene of a murder, the investigation of which leads to – yup, you guessed it – “the cheese on stilts.” I won’t spoil the surprise of what it actually is. Also, Brown manages to work in a Schopenhauer reference, probably one of the rare times that the philosopher’s name was invoked in a pulp magazine. The other Carter Monk stories included are “Footprints on the Ceiling,” which is about a theater troupe that is shocked by what appears to be a murderer that walks on walls, and “The Monkey Angle,” which finds Monk investigating what a runaway monkey has to do with a kidnapping case.

Other pieces of note are the original ending to The Screaming Mimi (a wonderfully outlandish flight of fancy that takes an unexpected twist); “Get Out of Town,” which blends Brown’s love for music and bars with a fun gangster story; “The House of Fear,” about a housewife whose night classes in “Logic” prove life saving; and “Trouble Comes Double,” a cautionary tale about why one should never pass up a lobster dinner for a backstage invitation from a shapely dancer.

To close, two of my favorite quotes from the collection:

“And that gosh-awful melody went on, and each note seemed to hang in the air like a dead body hanging by its neck from one of a row of gibbets.” –“Get Out of Town”

“One by one the other lights were coming on now, and I could see my lobster again. But, instead of eating it, I watched the girl. She was even better looking than the lobster.” –“Trouble Comes Double”