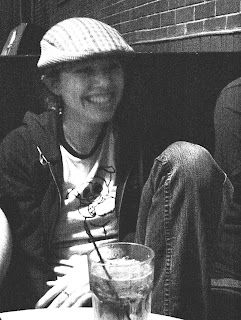 Needle 3 has busted loose and is on the prowl. If you haven’t already gotten your copy, get it here now. If you have gotten then, then you already know all about Libby Cudmore’s powerful story “Until Proven Guilty.” It’s about a new prison guard named Christian who’s trying to keep his head on straight. On the one hand, there are his colleagues who take lecherous liberties with the inmates; and on the other there is Lily, the big house’s sole “lady lifer,” who tries to appeal to the more gentle side of Christian. Can he trust anyone? And who will lead him to the emotionally shattering doom we know is inevitable in the noir universe? “Until Proven Guilty” is as strong as it is sensitive, filled with both characters hell-bent for despair and hellishly potent writing.

To celebrate the release of Needle 3, Libby was nice enough to do a Q&A with Pulp Serenade.

Pulp Serenade: What was the genesis for "Until Proven Guilty"?

Libby Cudmore: This is going to sound so cheesy, but I think it came to me in a dream. I already had the character of Christian floating around in a few other stories (he shows up in “Props” over A Twist of Noir) and this was a way to give him a backstory. I dream a lot about TV shows I’m watching, and at that point, we were devouring Oz. I think there’s probably some unconscious notes of Vern Shillinger in the character Merv.

PS: Was there something in particular that drew you to the setting of the female cell block and its many inhabitants?

LC: Women are brutal. We’re nasty creatures. We are capable of cruelty that most people cannot even begin to comprehend, but, as in all my work, I didn’t want to do the whole “women in cages” fetish-y violence. I feel like that’s far too prevalent in modern crime fiction. I wanted to have characters who were tough, tender, manipulative, lost and yet, somehow in as much control of their fates as they could be. 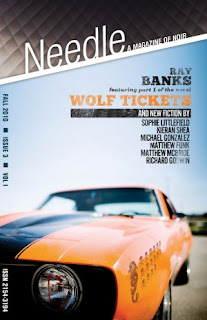 PS: When you were writing "Until Proven Guilty," did you have the whole story figured out ahead of time, or did the story change during the writing process?

LC: The story sort of developed on it’s own. I’m not big on outlines. The only real change from the original draft to the one in Needle is the extra scene with Tina, where she says that Lily should just “take the rape.” Someone in a writing workshop actually said that phrase to me, “take the rape,” when we were workshopping this story. I thought it was such an awful thing to say—not just to a woman, but in regards to a story where it would destroy the entire 3rd act—so this was my way of getting back at her for saying what might be the dumbest, most offensive thing anyone has ever said to me.

PS: You have some great lines in the story, but this one is a hall of famer for sure: "She's a laundry room blonde, wood-chip roots like weeds sucking the vigor from the rest of her head." Is there any story behind this one?

LC: Yeah, and I’m sorry to say it’s a pretty dumb one. There’s a scene in Chicago where Renee Zellwegger dyes her hair blonde in the sink of her cell, and I thought it was such a great image that I borrowed it. I don’t know where the second half comes from.

PS: As both a reader and a writer, what draws you to the criminal element?
LC: The same person who inspired “Unplanned” over at Thrillers, Killers ‘n’ Chillers got me into Raymond Chandler in college, which is when I really started writing crime fiction . . . but looking back through my old notebooks, I realized I had been writing it for much longer than that. I’m drawn to frustration. I’m drawn to sadness. I like stories and songs about men and women in dark situations. Chandler aside, I love Tom Waits, Warren Zevon and The Smiths, all music with these tender, tragic, aching lyrics. But what I’m not drawn to is bitterness. I hate reading wry cynicism and it really annoys me in actual people. The best crime fiction is the kind with that last glimmer of hope. That’s something everyone can understand, something that everyone—no matter how cynical— can feel.

PS: When we met at NoirCon, you mentioned that you had traveled to other conferences and presented at some. Where have you traveled, and what did you present on?

LC: I’ve been to CrimeBake, Bouchercon and Sluethfest, where I sat on a panel about screenwriting. My story “Props” was made into a short film, so I talked a little bit about the process of making that. I’ve also presented at The End, a graduate academic conference at Indiana University and attended AWP for the last two years—I’ll be part of a reading series at this year’s AWP in DC, so swing by Busboys and Poets and say hi! And I just got back from a guest stint at the Stonecoast MFA program, where I sat on a roundtable about conferences, a panel about collaboration and showed “Props” at the 1st (hopefully) Annual Stonecoast Film Festival.

PS: You also mentioned that you were a huge fan of The Shield at NoirCon. I'm sort of ashamed to say that I still haven't seen an episode -- but it gives me the opportunity to ask you to convince me to watch it. So – convince away!

LC: Oh wow, The Shield. It’s the best-written show ever. It’s so complex, there’s no good or evil. Characters you like do bad things. Characters you hate do good things. The show lacks clichés, and just as you’re prepared to roll your eyes at what you think is inevitable, the story veers off course and you cannot believe what just happened. Going back to what I said earlier, there’s this sense that these characters really believe what they’re doing is right—in some form or another—and you watch as the stakes get higher and higher, as the crimes keep getting worse and worse, as the lies pile on top of each other and that light gets dimmer and dimmer. It’s this great slow, sad, sinking feeling, and I’ve never had that with any other show. Even my friend who hates cops loved The Shield—I can’t give a better endorsement than that.

I’m also in love with Walton Goggins, who plays Shane Vendrell, so there’s that. Kenneth Johnson, who plays Curtis Lemansky, is pretty dreamy too. But my guess is that doesn’t matter to a good chunk of your readers.

PS: What's the ideal writing environment like for you, and what is the typical environment that you write in like?

LC: I have a pretty great writing environment, actually. We’re renting a house this year, so I have my own office. I painted the walls purple, and I have my bookcase and my Tom Waits poster and all my weird desk stuff—voodoo dolls, tiny dinosaurs, action figures—and a space heater. It’s the warmest room in the house, so I have little reason to ever leave it, which helps me get a lot of work done.

PS: What have you been reading this winter?

LC: I’ve started a PI novel based on the Victor and Sheila stories that Crime Factory is serializing, so I’m going back and rereading Chandler books I’d only read once—The Little Sister, Lady in the Lake, Trouble is my Business—to keep myself in that PI frame of mind. I don’t read as much as I should.

PS: Lastly, any other publications or upcoming projects you can mention?