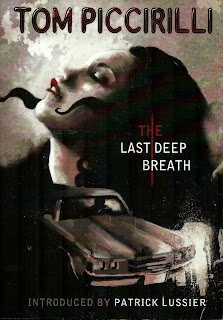 It takes a special kind of writer to make the ugly truth so damned beautiful to read. Tom Piccirilli has that touch, and The Last Deep Breath is a stunningly dark and evocative example of contemporary noir fiction. Published in a beautifully bound edition from Tasmaniac Publications with illustrations by Daniele Serra, Piccirilli’s tale eloquently captures the good-but-futile-fight of one man against a morally bankrupt world.

Noir protagonists are rarely so ambitious as to want to change the world. Putting one life back on the right track is difficult enough. Often it is impossible. Yet this is the mission that Grey has given himself. He crosses the country in search of his foster sister, whom he last saw hobbling into his New York City apartment with a knife in her side. Then she vanished. So Grey takes to the road, digging deep into the vice, opportunism, and immorality that flows through the country’s veins.

The Last Deep Breath is what Piccirilli has called a “noirella.” Its 100 pages are tightly composed, the prose as economic and suggestive as a poem, and the final punch even greater than Piccirilli’s recent Shadow Season. There’s a dreamlike insistence and ambiguity to the story. Piccirilli organizes the material into compact, impressionistic chapters that move ahead with swift, grim determination. 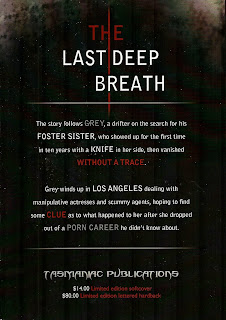 Much of Grey’s journey, like his name suggests, is rather sketchy. Piccirilli doesn’t give us all the details of his life or his mission, but those details he does provide are bold and intimate. We only see the briefest glimpses of Grey drifting between America’s highways and back roads, and the pick-up relationships they inspired, but their amorality and ambivalence sets a tone that resonates throughout the book. Compared to the near-nihilistic overtones of these passages, Grey’s seemingly moral search for his sister seems incongruous until it becomes apparent that his sister is the only thing preventing him from capitulating and giving up on everything. The desperation and hopelessness of his endeavor only fuels his own fire all the more. And therein lies the contradiction of noir protagonists, caught on the precipice between losing and believing in nothing, and not knowing which is worse.

In its sordid (and occasionally surreal) depiction of Los Angeles and the seamier side of the entertainment industry, The Last Deep Breath stands alongside Eric Knight/Richard Hallas’ You Play the Black and the Red Comes Up. They are picaresque adventures into the Noir Heartland of America, and they turn the tables on the genre of road stories that is such a firm fixture in our culture. Donald Westlake commented on this aspect of American literature: "One of our continuing myths was summed up in Huckleberry Finn: Our escape, what we think of as our escape, is that we can always light out for the territories. Well, we really can't, not anymore, but that's part of the American character—that belief that at any moment, I could just drop the coffee cup and disappear." Westlake wasn’t talking about Piccirilli’s book, but that’s the horror and the salvation at the heart of The Last Deep Breath: the sister’s past and Grey’s future is one and the same.

As an added bonus, The Last Deep Breath closes with Piccirilli’s short story “Between the Dark and the Daylight” (nominated for the International Thriller Writers Award for "Best Short Story" in 2009). A tragedy set around a hot air balloon ride gone disastrously wrong, the setting is as innovative as the story is heartbreaking. The story was rightfully anthologized in Ed Gorman and Martin H. Greenberg’s excellent Between the Dark and the Daylight: And 27 More of the Best Crime and Mystery Stories of the Year (Tyrus, 2009).

If I haven’t already exhausted my enthusiasm, let me end by again praising Piccirilli’s impeccable craftsmanship, and his unerring sense of character and mood. Perhaps because of its brevity, The Last Deep Breath is a great indication of the author’s talent and capabilities. I am looking forward to seeing what Piccirilli has in store for us in 2011.

I interviewed Piccirilli back in 2009 about Shadow Season.

Here are a few of my favorite quotes from The Last Deep Breath.

“She knew the reality, he knew the dream. Grey wondered if there would be any middle ground to find.”

“None of it means anything to anybody. It’s just what we do.”

“He felt rooted and light on his feet as he moved to the first bouncer, spun, and brought an elbow up high to the no-neck’s temple. The guy dropped like a dead rhino.”
Posted by Cullen Gallagher at 9:00 AM