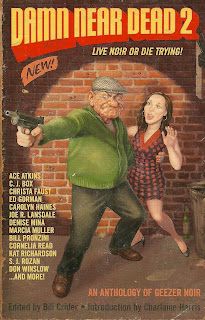 Geezer Noir returns with a vengeance in Damn Near Dead 2: Live Noir or Die Trying (Busted Flush Press, 2010). The first collection, released back in 2006, showed us that the elderly don’t always go gentle into that good night – give them a cane, a gun, a golf club, anything they can get their arthritic hands on, and they’ll put up a fight to the bitter, brittle end.

That first collection was just the tip of the proverbial ice-berg. The geezers are back, and this time with a whole new crew of writers, along with Bill Crider as editor. (Crider’s story “Cranked,” from the first anthology, won a Derringer and was nominated for an Edgar.) The 28 stories included feature characters ranging from their late 50s to the late 160s. That’s right – “Stiffs,” by Neil Barrett Jr., has a hitman that is 168 years old. The story also takes place on the Moon. Didn’t expect that, did you? I sure as hell didn’t.

Damn Near Dead 2 has a lot of surprises in store for readers. Some of the stories are downright hilarious (like Joe R. Lansdale’s “The Old Man in the Motorized Chair,” about a retired detective who has to solve a case before his favorite TV show about snakes begins, or Tom Piccirilli’s “Zypho the Tentacled Brainsucker from Outer Space vs. The Mob,” whose title says it all); others are tragic (like James Reasoner’s “Warning Shot,” about a security guard who accidentally kills a man while on duty, and Scott A. Cupp’s “Love Story,” about an ex-cop whose love for a woman unknowingly puts her in danger); while others show that darkness doesn’t decrease with age (Toni L.P. Kelner’s “Kids Today” and Marcia Muller’s “Sometimes You Can’t Retire” end with grim, ironic punches). 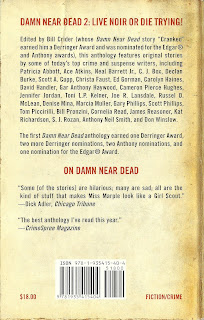 The stories and their characters are very diverse, but they are all excellent. The anthology reads cohesively cover to cover, and it never feels like the writers are going over the same territory or repeating the same ideas. There's a lot of originality to be found in Damn Near Dead 2, and the writers take the unifying theme seriously, which is what saves the book from falling into parody. Editor Crider and publisher David Thompson did a superb job in rounding up a strong crew of writers for this collection.

Starting off the anthology is Patti Abbott, who sets the tenor perfectly with one of her best stories yet. “Sleep, Creep, Leap” is about an elderly man who tries to do the right thing when he thinks his neighbor is in trouble, and winds up making things a whole lot worse. Abbott is a smart and patient writer, and she puts as much craft and care into building the characters as she does the suspenseful atmosphere. The payoff at the conclusion is as much due to the clever plot twist as to the characters coming full circle.

There are loads of other terrific stories – like Anthony Neil Smith’s “Granny Pussy,” about a doddering pimp and his over the hill hookers, which manages the difficult task of balancing its eccentric humor without turning its characters into caricatures – and I could go on and on about the masterful precision of Bill Pronzini’s retired hitman story “Trade Secret,” or how Don Winslow’s elegiac “Old Men and Old Boards” brings the collection to a tonally fitting close… But I should probably just let you discover the many joys, sorrows, laughs, and killings to be found in Damn Near Dead 2.

Damn Near Dead 2: Live Noir or Die Trying is now available. The print edition features outstanding original artwork from Jeff Wong, including the full-color geezer bandit on the front cover shooting his way to freedom, as well as several black-and-white drawings inside, including a fond farewell image of the late David Thompson. Check with your local bookstore to see if it is in stock or if they can order a copy for you.

Here is the full table of contents: