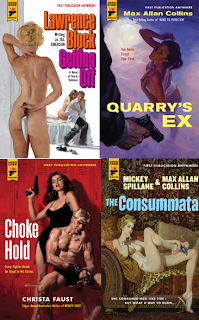 Charles Ardai, editor of Hard Case Crime, just emailed a newsletter with lots of exciting updates for the 2011 calendar. Back catalog will soon be shipping! The return of Spillane and Collins! More Quarry! More Christa! More Block!

Here's the news as Charles tells it:

Bit by bit, we're getting closer to the re-launch of Hard Case Crime with our new publisher, Titan Books. Our backlist titles are already available for pre-order from bookstores and online booksellers such as Amazon.com and BN.com; copies will start shipping in February. And we've got new books on the way, too -- if you go to our Web site, www.HardCaseCrime.com, you'll find cover art and sample chapters for four upcoming titles, all of them brand new:

* GETTING OFF: A Novel of Sex and Violence by Lawrence Block (writing as Jill Emerson) -- The story of a beautiful young woman who sets off on a mission to kill every man she's ever slept with (and she's slept with quite a few). For this book, Lawrence Block is reviving a pseudonym he hasn't used in almost 40 years, under which he wrote seven particularly sexy books back in the day. When he saw how sexy this new one was coming out, he thought...that's the Jill Emerson in me coming out again...

* THE CONSUMMATA by Mickey Spillane and Max Allan Collins -- In the late 1960s, Mickey Spillane announced he was writing a new novel featuring the star of his bestseller THE DELTA FACTOR, but after writing half the book, he set he manuscript aside. Twenty years later, he handed the unfinished manuscript to his friend Max Allan Collins, suggesting that Max might finish it someday. And twenty-some years after that...it's finally done. It's the story of one thief going after another against the backdrop of Miami's Cuban-American community, and it's classic Spillane. Anyone who misses the Good Old Stuff will find plenty to love here.

* QUARRY'S EX by Max Allan Collins -- This is one I know you've been waiting for a long time, the next story in the saga of the hit man known as Quarry (star of THE LAST QUARRY, THE FIRST QUARRY, and QUARRY IN THE MIDDLE). This time, Quarry sets out to protect a movie director who's been marked for murder...only to discover that the director is married to Quarry's ex-wife, the woman whose infidelity pushed him into a life of crime in the first place.

* CHOKE HOLD by Christa Faust -- Another long-awaited title, this is the follow-up to Christa's Edgar Award-nominated MONEY SHOT. Ex-porn star Angel Dare is back; when a old co-star is gunned down in front of her, it's up to her to get his 18-year-old son, a hotheaded MMA fighter, to Las Vegas in one piece while two separate groups of killers are gunning for them.

Lots to look forward to! Do check out the covers -- and if you're hungry for some great reading now, you can prepare for the new books coming out (which doesn't happen till September/October) by ordering any of the old ones you've missed. If you haven't met Quarry or Angel Dare yet, you're in for a treat -- grab yourself a copy of MONEY SHOT or the earlier Quarry books. For Spillane fans, there's DEAD STREET, Mickey's last novel. And we have five other books by Lawrence Block you can enjoy while waiting for GETTING OFF to come out: GRIFTER'S GAME, THE GIRL WITH THE LONG GREEN HEART, LUCKY AT CARDS, A DIET OF TREACLE, and KILLING CASTRO.

Things are moving forward on the film adaptation of LITTLE GIRL LOST -- I spent an afternoon with the screenwriter who's penning the adaptation, showing him around some of the real-world locations where scenes from the book take place. (And scenes from its sequel, SONGS OF INNOCENCE. We checked out the tunnels under Columbia University, and the all-night tempura joint on Broadway, and FAO Schwarz...) No guarantee the movie will go before the cameras, but...every step we take makes it that much more likely.

And HAVEN, the TV series based (loosely) on our 13th book, Stephen King's THE COLORADO KID, is gearing up for its second season on SyFy. The writers are working in a white-hot storytelling heat, with filming scheduled to begin in a few months. I'm biased, but I think the show really hit its stride in the second half of the season last year, and there are some great stories coming up. We don't have a premiere date yet for the second season, but I'll let you know as soon as we do.

One final bit of news (if you'll forgive a bit of boasting by a proud father): the Ardai/Novik clan saw an addition in December, a baby girl named Evidence ("Evi" for short).

We'll add a photo of her to the Web site just as soon as she's old enough to wear a fedora.