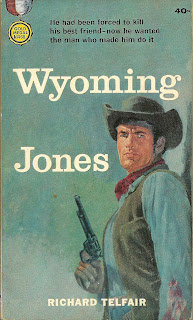 As Richard Telfair’s Wyoming Jones begins, Wyoming and his mentor, Curly, are pinned down by a band of Red Cloud’s Sioux fighters who have stolen their buffalo hides and won’t stop until they are dead. When a daring escape goes wrong, Curly is killed. Wyoming is all set for retaliation when he discovers that the Sioux might not have been behind the massacre after all. So Wyoming sets off across the West, and he won’t stop until Curly’s death is avenged.

The story moves ahead very rapidly in a straightforward manner. There aren’t any subplots to distract Wyoming, but I rather liked how streamlined the narrative was. It made for a gripping cover-to-cover read in one sitting.

Originally published by Gold Medal in 1958, Wyoming Jones is a revenge Western as relentless and driving as anything by Harry Whittington, with some important distinctions. Whittington’s protagonists are typically tormented and running from their pasts, whereas Wyoming isn’t running from anything so much as he is just constantly moving forward. Rarely looking back at yesterday’s town, last night’s woman, or the previous killing, Wyoming can be both ruthless and remorseless. This hardboiled cowboy would be right at home with Race Williams, Sam Spade, or any of the other fabled hardboiled detectives out of Black Mask. 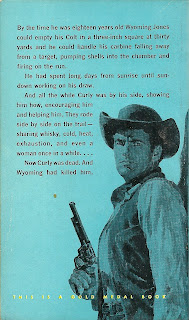 There’s also a reckless, unpredictable quality to Wyoming that makes him an exciting character to read about. All it takes is one off-color remark in a saloon to set him pistol whipping or drawing against a total stranger. He doesn’t flinch when he demands a sheriff take of his tin star. He’ll shoot off an earlobe just to get information. And he brazenly challenges his Comanche captors to a fight to the death like it is the most casual thing in the world. Wyoming Jones is 100% hardboiled, and maybe just a little bit crazy, too – but that’s the daredevil charm that makes him such a winning character. He’s also a fair fighter, so he remains sympathetic despite the brutality.

Author Richard Telfair’s real name was Richard Jessup. He was born in 1925, and before becoming a writer he was a merchant marine. Ed Gorman had this to say about Telfair/Jessup: “He brought a precise, evocative style to all his books and at least once a novel he fried your brain.” Telfair/Jessup wrote a number of novels for Gold Medal, including two more in the Wyoming Jones series: Wyoming Jones for Hire (1958) and Day of the Gun (1958). He also wrote another series character, Montgomery Nash, who worked for the Department of Counter Intelligence. His most famous novel, however, was probably The Cincinnati Kid, which became a successful movie with Steve McQueen. Jessup passed away on October 22, 1982 in Nokomis, Fl.

Here’s some sage wisdom that Curly passes on to Wyoming early on in the book:

“When you got to fight, fight! Don’t stand around and give the other fellow a chance. You don’t want to fight unless you have to, but when you do, that’s when you do what I tell you. There’s elbows, and knees and feet and a good head for buttin’ that can do a hell of a lot more damage than your fists. And when them things don’t work, boy, you grab something handy and use that.”
Posted by Cullen Gallagher at 8:25 AM