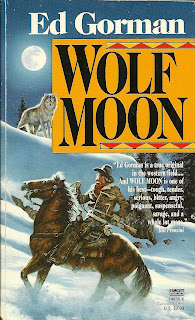 I’m a big fan of Ed Gorman’s work, but the opening prelude to Wolf Moon still caught me off guard and left me excitedly wondering what more twists lay just around the corner? Many more, I was pleased to discover. The story is as noir as they come, with a bleak and blistering finale you won’t soon forget. Originally published by Gold Medal in 1993, Wolf Moon is now available for the Kindle via Top Suspense Group.

The novel opens with the story of a wolf cub who was captured, and whose family was murdered, by a man named Schroeder. Gorman then shifts to the story of Chase, who was set-up and sent to prison because of this same Schroeder. When he gets out of jail, he has the chance to reunite with the love of his life, Annie, and start a new life as a police officer – but Chase’s thirst for vengeance threatens to ruin everything.

With its dual story of man and animal, Wolf Moon sometimes has the quality of a fable. It’s an original and innovative spin on the Western revenge novel, and Gorman isn’t afraid to risk taking new paths or going to dark places with this one. The parallel stories of entrapment highlight not only a festering need for vengeance that consumes one’s identity, but also how the loss of one’s family can ignite and exacerbate that all-consuming passion for destruction. Family is an important topic in Gorman’s work, a constant and necessary reminder of humanity, and without that reminder a character drifts away into oblivion. Family offers his characters a moral grounding, a reaffirming sense of the self, and absolution for their actions, whatever they may be. 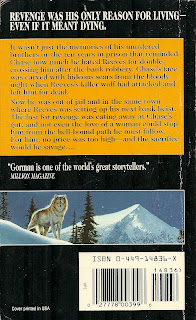 A reoccurring motif in Gorman’s books is that there no crime is worse than hurting one’s own family, or their loved ones. That single act of betrayal, whether deliberate or accidental, seems to be the most devastating of all. These sorts of stories reappear throughout Gorman’s work, sometimes as the central plot (as in Wolf Moon), and other times as an aside about a minor character. Chandler famously wrote that Hammett “gave murder back to the kind of people that commit it for reasons, not just to provide a corpse.” Gorman seems to follow in this trajectory, but he takes it in his own direction: he gives back a conscience to crimes committed, a lingering sense of regret that never goes away, and a moral weight that wears away at ones soul.

Wolf Moon is an excellent Western novel thick with noir and suspense overtones. Fans of Gorman’s crime novels shouldn’t miss this one. Wolf Moon is now available for the Kindle via Top Suspense Group.

Here are a few of my favorite lines:

“They’d drifted down from the taverns, animals who could smell blood on the wind, animals whose taste for violence was never sated, miners, merchants, cowboys, drifters – it was a taste and thrill that cut across all lines of class and intelligence and color. Most men, and a sad number of women, loved watching other men hurt each other.”

“After a time the darkness was gone and I could see the stars again, and I wondered what it would be like to live on one of them, so far away from human grief. But they probably had their own griefs, the people on those stars, just as bad as ours.”

“A jailbird sits in his cell and dreams up these sweet little stories about how good life will be after he pulls just one more job…I should put a bullet in your face right here and right now.”

“And then there was the eternal cosmic night, cold and dark, not life and not quite death, either. Just pain and – blankness.”
at December 12, 2010