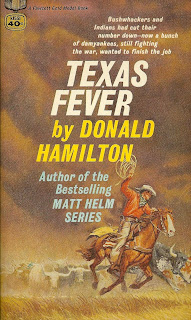 Donald Hamilton is best known for his series character Matt Helm, a government secret agent that would ultimately appear in print in 27 books, all published under the Gold Medal imprint. (A 28th was written but, as of now, remains unpublished.) In 1960, the same year that that Hamilton christened Matt Helm with Death of a Citizen, he also published a Western novel for Gold Medal that seems to have fallen off the radar since its publication: Texas Fever. An unjustly overlooked part of Hamilton’s bibliography, it is first-class entertainment written with absorbing characters and a zestful plot.

Texas Fever is about Chuck McAuliffe, a young man on a cattle drive with his brother, Dave, and their father, Jesse. They plan on taking the cattle into Kansas and selling them for a hefty profit – that is, if they can avoid the rustlers and slip past The Quarantine, which is set on keeping Texas longhorns out of Kansas for fear of spreading disease. Along the trail they meet up with Amanda Netherton and her Papa who was badly wounded in a skirmish with some bushwhackers. Chuck is immediately taken by Amanda’s beauty, but Jesse has his own lingering suspicions about the duo and their intentions. 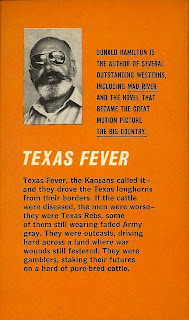 Western book reviewer Nelson Nye gave Texas Fever a short but positive mention in The New York Times when it was first released. He wrote that, “This story is well told....and it's a corker, gents, done up in full color.”

Hamilton writes the story with a close third-person, and he does a great job capturing the mindset of his main character, the angry young man Chuck McAuliffe. Too young to fight alongside his father and brother in the Civil War, Chuck was left behind to single-handedly take care of the house, the ranch, and his mother. When the war ended, an unspoken gulf separated the men in the family – neither could appreciate the sacrifices and grief the other went through. This family history becomes a strong current running throughout Texas Fever.

At times, the novel seems like a coming of age story, at others a revenge saga, and at others a rousing adventure yarn set on the fabled cattle trails leading north from Texas to Abilene. Hamilton writes with a combination of energy and lyricism – there’s a driving force behind his plot, but also a patience and care for his characters and their development. I like what Hamilton was doing with the Western genre and I’m looking forward to reading his other Gold Medal Westerns, which include Smoky Valley, the anthology Iron Men and Silver Stars (review coming soon), and reprints of the Dell books Mad River and The Two-Shoot Gun (originally called The Man From Santa Clara).

Some of Donald Hamilton’s wisdom from the book:

“Just remember one thing…when you’re young you bleed easily, but you heal quickly.”

“When a man who's been successful all his life suddenly finds everything going bad that he sets his hand to…Well, after a while, I reckon, something kind of snaps inside him.”

“First I will contemplate the fact that small oblivion can be found in large bottles, and large oblivion in small ones. There must be a philosophical truth involved, somewhere.”
at December 07, 2010