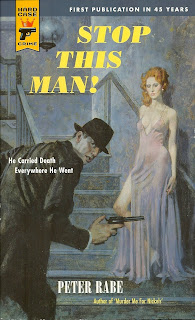 Originally published in 1955, Stop This Man! was Peter Rabe’s first crime novel. It’s also more in line with certain genre conventions than his later novels (such as the previously reviewed Kill the Boss Good-By and Dig My Grave Deep). The story is about Tony Catell who just pulled off a beautiful job heisting gold from a laboratory. Unfortunately, the gold had already been exposed to nuclear radiation. Still determined to sell it, Catell sets off on a cross-country journey to California, leaving a trail of corpses rotten with radiation. All the FBI has to do is follow the bodies to get to Catell – but can they reach him before it is too late?

Despite a strong, fast opening, the novel hits some speed bumps after Catell hits the road. Switching perspectives between Catell and the feds on his trail muddles the plot and seems unnecessary. One of the strengths of Kill the Boss Good-By and Dig My Grave Deep were their mega-streamlined plots. This is not the case with Stop This Man! Particularly in the second half of the novel, Rabe becomes increasingly interested in digressing from the plot, focusing less on the catch-me-if-you-can with the FBI and more on Catell’s reluctant involvement with California gangsters. It seems as though even he got tired of the hot-topic cat-and-mouse chase formula and wanted to write something different. 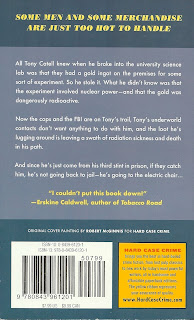 While the plot is less focused than Rabe’s later books, there’s a mercurial drive that redeems Stop This Man! The characters act unpredictably, and their detours are frequently more interesting than their final destination. There are some wonderful turns of phrases, vivid descriptions of radiation nausea, and some particularly colorful characters (my favorite: “A shrill-looking whore was eating a doughnut that left sugar grains sticking to her lipstick”). These are the qualities that would come to define Rabe, and you can see seeds of their development even in this early novel.

Stop this Man! was reprinted by Hard Case Crime in August 2009.

“Catell reached forward, lunging and the world jarred with a screeching searing flame of red that weaved, burst, and then sank sharply into itself, leaving nothing but a total dead black.”

“In the first instant of seeing, of knowing, Catell heard the terrible sounds of everything that breaks, bursts, and rips apart beyond repair, and the mad turning of all that moves, speeds, dashes about for a while, turning like a giant wheel, around, around. Then the wheel stopped.”