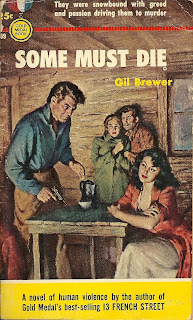 Take one step and you’re almost dead. That’s how Gil Brewer’s blistering snowbound Western Some Must Die begins. Setting the tenor for the rest of the novel, Brewer refuses to let go of the fevered sensation evoked by the first two sentences: “After the first bright moment of agony, he felt no pain. He lay there in the thinly sifting snow and listened as the smashing echo of the sprung trap chuckled back and forth against the canyon walls and went away.” Tension and paranoia steadily build as the story unfolds largely in a single, claustrophobic house in the mountains over the course of 3 sleepless days as its inhabitants wait like a coiled snake.

This noir-tinged Western novel was originally published by Gold Medal in June 1954. Lost in the mountains of Monata, Clay Hardan is caught in a bear trap. He’s got $150,00 in his saddlebags, and he’s running from both the law and his two partners he ripped off. Freeing his leg, he manages to crawl to a nearby house where even more trouble lies behind closed doors. There’s Hall, an alcoholic has-been doctor who spends his evenings shooting pistols at flies; his embittered wife, Marla, who will flirt with any man able to help her escape; and her fanatical sister, Leona, who harbors secret feelings for Hall. Even if Clay could stand, with his ex-partners nipping at his heels and a raging blizzard outside, there’s nowhere for him to run. 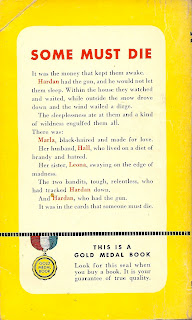 Brimming with intensity and isolation, Some Must Die is twice as forsaken and twice as fiery as Brewer’s breakthrough novel 13 French Street. The two share a lot in common: they are both chamber dramas mostly set in one location, which fuels the sexual tension and forces the latent violence to rise to the surface. But instead of the single triangle of characters of 13 French Street, Brewer makes the plot more complex by having two separate triangles – the criminals (Clay, Sam and Stewart) and the family (Hall, Marla and Leona) – that intersect, multiplying into twisting, ever-growing vines of deceit. It makes for a dramatically superior book, but also gives the human interaction greater psychological depth and a wider range of emotions.

The snowy, mountain setting is suggestive of Walter Van Tilburg Clark’s Track of the Cat, but the action and characters of Some Must Die are pure Brewer. While they fit perfectly in the Western setting, there’s something primal about their actions that would make them right at home amidst any of Brewer’s contemporary settings, whether in urban cities or backwoods shacks. It is also a terrific fusion of Western and Noir sensibilities – lines like, “There was nothing here now, nothing inside him, only a great darkness,” add a melancholic shade to an otherwise exciting story.

Despite its excellence, Some Must Die “sold the fewest copies of his early books,” according to Bill Pronzini’s essay “Forgotten Writers: Gil Brewer.” It is a shame that it is out of print (and only went through one paperback printing in June 1954), not only because it is Gil Brewer’s only Western, but because it is an all-around excellent novel, and a distinctive member of the Gold Medal family.

Here are some of my favorite quotes. The first one, in particular, is pretty bleak, even for Brewer.

“I knew it would come to something like this – the slow disintegration, the eternal creep toward primeval club and cave.” He belched, looking sadly out into the room, his slack-jawed face haunted with a kind of serious resignation. “The ubiquitous purple twilight raining down on all the unfettered souls living a liberty that never existed in the first place – gagged and bound with strips of their own hides in the second place. Life in death amid suffocation out of decay.” Again he belched. “Excuse me,” he said. “Amen.”

“It was like moving in a dream. The tight brink of disorder; deliberately rebelling against the instinct to do things quickly, to know, to finish the job at hand. Forcing it back and waiting some more with every muscle as taut as the thinnest guitar string , the nerves singing with strain.”

“Says I ain’t alive no way, Sam. Says I been dead ever since I was born. Says a man ain’t got no freedom without he kills himself someway and life is a slaughterhouse, o’ny it ain’t that neither. Hell. You got to stop it. He’s a damned – Where’s the whisky at?”

“Honesty is where you find it, like truth. The same thing. Only I have become a spectator who doesn’t care anymore. That’s the only way to watch, you know? You may wonder at me all you wish. I don’t care about that, either. What’s done is final. I quit ticking, like the old clock, years ago. Like the old clock, it doesn’t really matter whether I run or not. Time goes on just the same, it’s irrevocable. And there will always be other frantically ticking clocks around to carry on. It simply doesn’t matter, that’s all.”