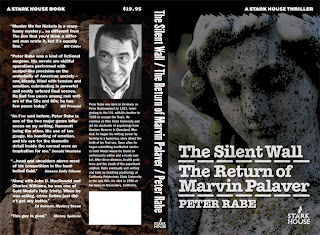 Stark House Press continues to champion the neglected legacy of Peter Rabe with this crime fiction-lover’s dream come true. Before he passed away, Rabe entrusted two unpublished manuscripts, The Silent Wall and The Return of Marvin Palaver, to Ed Gorman. After many years, they are seeing their first publication along with Rabe’s rare short story, “Hard Case Redhead,” originally published in Mystery Tales in October 1959.

In The Silent Wall, Matty Matthews revisits the Sicilian town of Forza d’Aguil where he was stationed during World War II. He goes in search of a former lover and winds up finding nothing but trouble. Soon the local Mafia get involved, and Matthews knows he should leave…if only he could. First it is a problem with his Vespa, then it is a herd of sheep stuck in the road, and soon he realizes he is hostage in a hostile village with no way to contact the outside world.

The slow-building, sinister atmosphere is classic Rabe. His patient and meticulous prose is wonderfully detailed and builds to a tense climax and a final page that’s a real zinger. Bill Crider, writing about Kill the Boss Good-By in 1001 Midnights, commented that, “Rabe is one writer who always delivers where it matters most – on the last page.” The same thing could be said for The Silent Wall.

The Return of Marvin Palaver is another skillfully crafted tale, but tonally the opposite of The Silent Wall. This is a short novella that reminds me of Nathaniel West. It’s a supernatural, and slightly surreal, comedy about a junk dealer who is about to pull off the perfect scam when he dies in the middle of a sale. But Marvin Palaver isn’t one to go gently into that good night, at least not until he knows whether his scheme is a success or not…

Funny and inventive, The Return of Marvin Palaver shows us a new side to Rabe. His hardboiled novels were always a shade witty, but here he fleshes out the humor and runs with it. A really enjoyable, quick read. 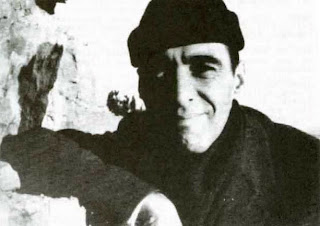 Here are three quotes I particularly liked from the book:

“This was as quiet, and secret as darkness. And this dark touch became our terrible bond.” –The Silent Wall

“I don’t dislike him. He is not important to me, but I do draw the line when he’s standing there and watches me making love. This is a dirty old man so obsessed that he has to come back from the dead to watch two people screw on a rug, for godsake. That’s disgusting, Abbie. Would you hand me that gravy, please?” –The Return of Marvin Palaver
at December 22, 2010