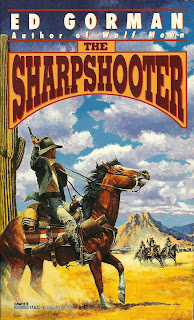 James Reasoner once told me that Ed Gorman’s Westerns were even darker than his crime novels. After reading The Sharpshooter, I’d have to agree. I’d also have to add that The Sharpshooter is one of his best (along with his latest Dev Conrad novel, Stranglehold). It is distinguished by Gorman’s trademark excellence: sage but humble wisdom, tragically empathetic characters, and impeccable storytelling.

Mitch Coldwell is tormented as only a noir protagonist can be. A washed-up trick shooter who tries to wash away a lifetime of sorrow with booze, no one in town takes kindly to him. Except for Evelyn, a local nurse who can look beyond the inebriation and see the human Mitch once was, and could be again. But then local tycoon Jeremiah Belden’s son is killed, and Jeremiah puts the blame on Evelyn. Soon she goes missing, and Mitch is the only one in town who suspects foul play. Can he put himself back together enough to save the missing woman?

Before I make it sound too depressing, one of Gorman’s gifts is his of humor. Whether it is Mitch vomiting on neighbors or trying to willfully wet himself in the back of a carriage, Gorman’s comic sensibility is utterly human, and you can find in these light-hearted moments the same perceptive and knowing qualities as you could in the book’s darkest scenes. 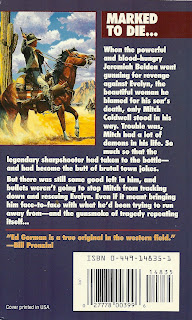 Amidst all the bleakness, Gorman is able to create these magical, spontaneous moments of warmth between two characters. The characters could have known each other for lifetimes or for minutes, but these brief feelings of human attachment and connection stand out as one of the most significant aspects of Gorman’s work. Evelyn’s kind words to the town rummy on a bench; John, Mitch’s colleague in the show, who stood by during the best and worst of times, and is willing to be there for the worse that’s yet to come; Sonia, Evelyn’s co-worker, who learns to look beyond Mitch’s boozing; and even a corrupt employee’s moment of honesty – these scenes, however fleeting, overpower all the moments alienation and self-loathing that occur in the story.

One of the aspects of Gorman’s writing that I find continually rewarding is his modest but unerringly articulate style. The clarity of his expression, the sleekness of his plotting, and the openness of his narration makes The Sharpshooter all the more powerful.

Picking just a few of my favorite lines of this book is no easy task – but I’ll give it a shot.

“So, you see, there are all kinds of reasons why people that dislike other people. The only thing you can worry about is if you’re good to the people who care about you. Nobody else matters, the way I see it.”

“No, there was no way I’d ever blame her for what she’d done. She’d just been trying to survive the best way she knew how. Sometimes that’s all a person can do.”

“The men, being men, tended to end up in liveries, blacksmith shops, feed stores, and, of course, saloons, where they promised their wives they’d be 'only for a beer or two,' but then started doing the kind of serious drinking that middle-aged men do to push back the grave momentarily and feel young again. It’s not much different than their wives looking in dress shop windows.”
at December 12, 2010