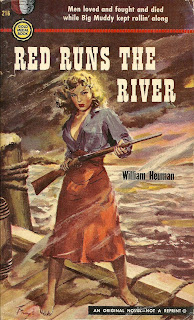 William Heuman was born February 11, 1912 in Brooklyn, NY. He was a prolific writer who wrote for a number of the pulp magazines in a variety of genres, though it appears that Sports and Westerns were his two most consistent. Among the magazines he published in are Dime Sports Magazine, Thrilling Sports, Fifteen Western Tales, Street & Smith’s Western Story, Dime Western – the list goes on. His first full-length novel was Fighting Five (another sports-themed story) in 1950, and he would go on to write over 70 more novels, many of them Westerns, and many of them for Gold Medal.

Red Runs the River was published in 1952, and it’s a terrific story set along the Missouri River. Kirby Trent and his steamboat The River Queen are making the last trip down river from Steamboat Bend before winter begins. As soon as he arrives, however, problems arise. First, there is new competition in town – a rival steamboat and its hot-tempted but beautiful captain Judy Greene. And then there are the threatening notes from The Combine, who want Kirby to join up with them or else face the wrath of their phantom-like gunboat that haunts the Missouri looking for uncooperative independents like Kirby. And if Judy and The Combine don’t do Kirby in, there are always the Sioux, waiting just around the bend to ambush the passing boats. 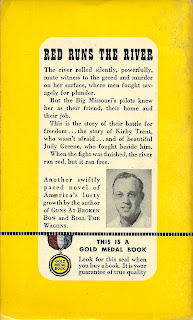 I really liked the river setting of Red Runs the River, which was a nice change of pace from the other Westerns I’ve been reading, which have largely taken place in Texas and other parts of the American Southwest. The steamboat and the port town make for a great, atmospheric setting, which Heuman brings to life with wonderful detail.

Heuman’s style is certainly different from the other Gold Medal Western writers that I’ve read. Unlike the frenetic energy of Whittington and the hardboiled sensibility of Clifton Adams, Red Runs the River is fueled by a slow-burning tension. Heuman is patient but deliberate with action, often choosing to steadily build suspense that he is able to maintain throughout the book. Each new character introduced brings new possible conflicts, double-crosses, or betrayals. What Heuman does share in common with Whittington and Adams (and many other Gold Medalists) is a streamlined plot, a smartly constructed novel, and intelligent, three-dimensional characters.

Kirby, in particular, stands out as a unique and compelling character. He’s plenty brave and plenty tough, but more than anything he is a strategist. When we are first introduced to him, he is figuring how to preemptively defend the boat against an attack from Indians that could come at any moment. Throughout, Kirby approaches conflict first through intelligence, sizing up The Combine’s threats and the hidden threats of Steamboat Bend.

Among Heuman’s other novels for Gold Medal are: Guns at Broken Bow, Heller From Texas, Hunt the Man Down, Keelboats North, On to Santa Fe, The Range Buster, Ride for Texas, Roll the Wagons, Secret of Death Valley, Stagecoach West, Violence Valley, and Wagon Train West. There is a nice cover gallery here. He passed away on August 21, 1971 in Huntington, NY.

Some quotes from the book:

“He lashed out with heavy fists even as he retreated, and several times he caught Barabee full in the face with the blows. It was the sound of a meat ax hacking at a chunk of meat.”

“The air had left his lungs in one long gasp, and the water was coming in. He tried again, but his efforts were weak. The blackness closed in around him. He felt as if he were being compressed into a very small space.”

Yellowstone Sam squinted through the rifle barrel. “You expect it,” he said sagely, “an’ you never get it, Captain. It’s when you ain’t expectin’ it. That’s when they make you sweat.”

“It was wrong and unnatural to be thinking of river landmarks as a man kissed a woman, but Kirby Trent was doing that. He felt her lips respond, and he heard her murmur, and then he heard another sound in the doorway behind him.”