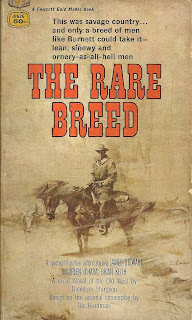 Theodore Sturgeon is most famous for his science-fiction short stories and novels, but he also wrote Western short stories, and a single full-length Western book – a novelization of the 1966 movie The Rare Breed, which starred James Stewart, Maureen O’Hara and Brian Keith. The movie tie-in was based on an original screenplay by Ric Hardman. Sturgeon’s plot differs slightly from the finished movie, but I am unsure of whether these story changes were made by Sturgeon, or whether the script itself was altered after production began (and, presumably, after Sturgeon’s novel was already written).

Sturgeon’s novel opens in St. Louis, with two English women – mother Martha Evans and her daughter Hilary – arriving at a cattle auction. They’ve brought with them a special breed of cattle, Herefords, which they aim to import and breed with the Longhorns. Many of the locals seem resentful of this new breed of cattle. Suspecting foulplay, Martha hires the veteran trail boss Sam “Bulldog” Burnett to accompany them to Texas to deliver their prized bull, Vindicator. But Hilary has her own suspicions about Burnett and his motives for taking the job.

Taken as a whole, The Rare Breed is uneven. On the plus side, Sturgeon certainly has a distinctive voice, and once in a while he will catch you off guard with an ornate, poetic passage whose wording and cadence is simply beautiful. His best lines are better spoken aloud than silently read. This passage, for example, is structured more like poetry than prose, and its power lies in suggestive imagery rather than concrete details.

The passenger’s wilderness is ever home-ground to the helmsmen, and there was little talk while the women watched the quarrel of light and the victory of day over the stars, and the metamorphosis of black nothingness around and under them, to endless green with a sharp neat border of horizon and a feather-flecked roof of blue.

He also devotes a lot of attention to phonetic dialogue, which adds a lot to the characters and makes for witty banter. 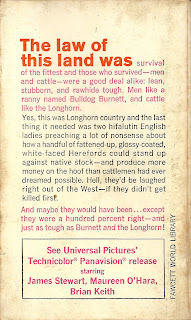 Some of the drawbacks to the book are that it seems hastily written and poorly structured. Sturgeon can spend 7 pages on a tangent about Martha Evans riding sidesaddle, but yet gloss over significant plot details. The poetic phrasing that can be lovely to speak can, unfortunately, drag down a story, as well. Plot points, dialogue, and action tend to get lost in bloated paragraphs and overly complex syntax. More than once I couldn’t discern the subject of a sentence, or even figure out who the “he” or “she” in a scene were supposed to be.

Uncharacteristically of Gold Medal novels, the pacing of The Rare Breed is also rather slow. The opening cattle auction scene is nearly the entire first third of the book, and it isn’t until almost 2/3s of the way that we actually get going on the cattle trail. Sturgeon seems less interested in the story and its characters than he does the specific details of the Old West. He lovingly and exhaustively describes how to filter muddy water through a cheesecloth and the distinctions of a English sidesaddle, and he renders geography with both precision and lyricism. Yet Sturgeon fumbles with significant story details – the finale is especially clumsy, with the introduction of a crucial character just pages before the book ends. It makes for an anti-climatic conclusion.

The movie The Rare Breed is quite good, from what I remember (though I admit it has been about 10 years). Sturgeon’s tie-in might not be the apex of his writing career, but it makes an interesting footnote to his body of work.

“No wonder they call this the land of opportunity. They’ll take anything that isn’t bolted down!”

“He drove the moon down while fatigue sat on his back like a gigantic rucksack with the devil perched on it, dropping one-ounce weights into it, one per second.”

“Maybe it’s mor’ls an’ maybe it’s just easier. Fella tells the truth all the time, he don’t have to remember what it was he said”
at December 10, 2010