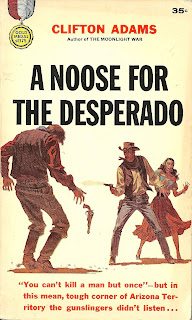 Originally published in 1951, Clifton Adams’ A Noose for the Desperado is decidedly darker than its predecessor, 1950’s The Desperado. And, for my money, it's also a little better. In the first book, Talbert “Tall” Cameron was a 19-year-old Texan forced into the life of an outlaw after he exacted vengeance on a Yankee officer that unjustly murdered his father. Now, Tall has made it to Arizona, and to earn some money he takes up with an outfit of criminals who hijack smugglers bringing over silver across the Mexican border. But when Tall is double-crossed, he is faced once again with the dilemma of running away from his problems, or standing up for himself and heading deeper into a life of crime.

Radiating with noir-ish overtones, A Noose for the Desperado fits right in there with the classical Gold Medal crime novels of the early 1950s. Clifton Adams melancholic writing reminds of David Goodis, at many points. Tall is as self-loathing as any of Goodis’ protagonists, and he is obsessed with increasingly nihilistic impulses the more he gives himself over to the criminal element. “Nothingness” and “no future” are frequent preoccupations that only depress Tall more and more. Nothing signals Tall’s downward spiral more than this realization, which would be right at home in Goodis’ Down There: “Then it hit me that maybe I could feel the day coming when I would look around me and discover how far down I had gone.” 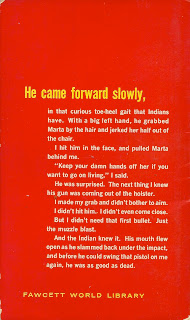 The most significant difference between the two books is that in The Desperado, Tall was running from the law, and he killed only in self-defense. Now, in A Noose for the Desperado, he is running from himself: he’s abandoned any hope of returning to his hometown and reuniting with his family and the girl he loves, and so for the first time he commits crimes for personal profit, something unfathomable in the first book. Adams really lets Tall hit rock bottom in this book. Whereas in the first novel, Tall’s relative innocence and his friendship with the aged outlaw Pappy Garret helped to redeem his character, A Noose for the Desperado doesn’t offer such easy absolution. Yet this makes Tall all the more fascinating and complex a character, especially when you read the two books back to back and you can really see how far his character has gone. And even though we abhor his actions, Tall remains sympathetic because he recognizes his corruption, and his powerlessness to enact any personal change makes him all the more tragic an anti-hero.

A gripping, action and suspense filled Western, A Noose for the Desperado is even better than The Desperado. I’d put it up there as one of my favorite Gold Medal novels of any genre. And considering this novel’s affinity with noir, it comes as no surprise that Clifton Adams also wrote some terrific sounding crime novels, two of which are called Whom Gods Destroy and Death’s Sweet Song. I haven’t read them, but Bill Crider is enthusiastic about them in this essay he wrote for Mystery File.

Some particularly noir-ish quotes from the book:

“Her dark eyes were full of hell, and when she flashed her white teeth in a grin you got the idea that she would like to sink them into your throat.”

“It was a nightmare of screams and smoke, and men wandering aimlessly with bullet holes in them like lost souls in limbo.”

“I felt completely lost. A bundle of loose ends dangled in a black nothingness.”

“Now I understood how a man could be so sick of himself that the most important thing in the world could be just forgetting.”
at December 01, 2010