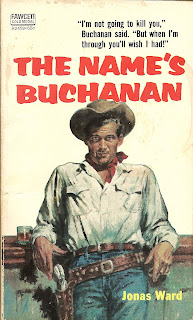 In 1956, hardboiled writer William Ard turned his pen westward and introduced one of the genre’s most enduring characters: Thomas Buchanan, better known as just “Buchanan,” a drifter as likeable as he is deadly. The first novel in the series was called The Name’s Buchanan and appeared under the pseudonym “Jonas Ward.”

When Buchanan rescues a young woman after being raped, he doesn’t realize that he is getting in the middle of a violent clash between two powerful families, one on either side of the US/Mexican border. Returning the girl to her family, Buchanan heads north to Agrytown, where he meets the young girl’s brother, Juan, who is hell bent on revenge. But when Buchanan lends a helping hand, he winds up in jail with Juan, and on the bad side of the greedy, backstabbing Agry family. With danger all around him, Buchanan must figure out how to save his and Juan’s necks while avoiding the wrath of the Agry clan. 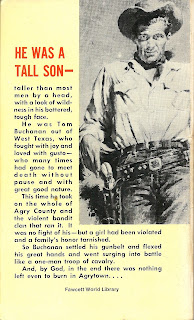 William Ard’s hardboiled background shows through. The writing is both tough and funny, which makes for an entertaining read. There is a lot of great action, and plenty of twists, especially with the Agry family ready to sell each other out at the drop of a hat. I also like how Ard gives Juan and his family a lot of attention in the novel, which makes for a richer tapestry of character, action and drama.

Buchanan is a classic example of the Western anti-hero – a hired gun with a mysterious past who rides into town as the story begins, and rides out when it ends. Trouble is never more than an arm’s length away, and excitement seems to follow Buchanan wherever he may roam. The girls like him, and the men (at least the honorable ones) respect him even more. While we get hints about his past as a hired gun for the Mexican Revolution, it is clear that his days as a gunman are behind him. His code of ethics is more noble than any law book, but he’s not indignant about morality. He helps the underdog, never takes advantage of anyone, never shoots anyone in the back, and won’t sell himself out for any price. How can you not be charmed a guy like that?

Before dying too young at the age of 37 from cancer, William Ard completed four more Buchanan novels: Buchanan Says No, One-Man Massacre, Buchanan Gets Mad, and Buchanan’s Revenge. A fifth, Buchanan on the Prod, was completed after his death by Robert Silverberg. Brian Garfield did one and then William R. Cox took over the series and it continued until 1986. For more information, check out Mystery File and this William Ard website created by Dennis Miller. 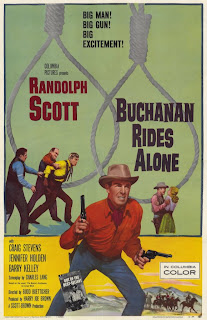 This book was also turned into a movie called Buchanan Rides Alone (1958), starring Randolph Scott as Buchanan, and directed by Budd Boetticher. Scott is a perfect Buchanan, at once rugged and delightful. The screenplay by Charles Lang streamlines the book, focusing more on Buchanan rather than the peripheral characters, which makes it move along at a nice, brisk pace. It’s a very enjoyable movie, and the DVD is terrific quality.

Here are three quotes that I particularly liked:

“His fists beat down remorselessly on that face below him, watched it change shape, felt the bones snap, stopped hitting only when he was too arm-weary and knuckle-sore to continue.”

“The big .45 came clear and jumped and roared death in Juan’s slim hands until there was no more vengeance in it. Even then the smooth-working hammer clicked three times on empty shell cases.”

“The little gun with the big caliber rocked the room with sound. Three times the Colt gave answer. Then it, like everything else, was quiet.”
at December 03, 2010