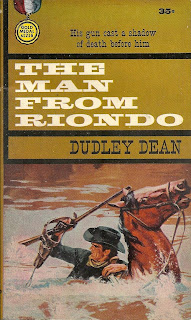 Dudley Dean McGaughey was a prolific writer who published under many names, including Dean Owen, Dudley Dean, and other similar variations. He began writing for the pulps in the 1930s, appearing in a number of magazines including Street & Smith's Western Story, Ranch Romances, Cowboy Stories, Real Western – an extensive bibliography is available here at The Fictionmags Index. He went on to have a long career as a novelist, including several titles for Gold Medal (and another Fawcett imprint, Crest). The Man From Riondo, published under the name “Dudley Dean,” originally appeared in 1954, and it was his second title for the imprint. It would ultimately go through numerous printings, so it would appear to be one of his more popular titles.

Brack Ventress lives in the shadow of his fast-draw, hard-livin’ old man. Everywhere he goes, people either loved or revile his father – the latter, more often than not. But when Kyle Gannon and his captive redhead, Nila, pass through Cornwall, Kansas on their way to Riondo, skeletons come out of the closet, and guns come out of their holsters. Gannon’s hatred for Brack’s father runs so deep he wants the boy killed, and Brack won’t stop until he uncovers the truth behind his father’s life, as well as his death. 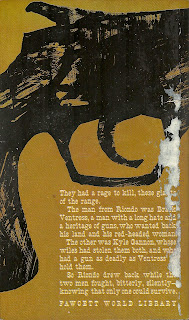 James Reasoner characterized Dean as “one of those authors who really liked to torment his heroes.” The Man From Riondo certainly fits that description. With its complex genealogies, concealed siblings, and blood loyalties and feuds, The Man From Riondo reads like a Greek Tragedy with Spillane-levels of torture. Rape, murder, lynching, lashing, kidnapping, ambushing, double-crossing – the list goes on. Dean doesn’t write the romantic West of larger-than-life heroes and their black-shirted villains, not by a long shot. Instead, Dean writes of a morally corrupt West where friends, lovers, and family are capable of the worst betrayals.

I liked Dean’s hard-edged style of writing and found the characters and stories compelling. But with so many characters with such intricate histories introduced all at once, I found the first few chapters to be overly expository and too dense. Once the introductions were over and the story got rolling the pace picked up and I was on board right to the very last page.

For more information, be sure to check out Mystery File’s “Dean Owen: A Checklist,” written by Steve Lewis, James Reasoner, Victor Berch, and Bill Pronzini.

Here’s a sample of the torment that Dean puts his characters through:

“He felt the intense pain of the wet rope across his ribs. So great was the blow that it caused his body to spin at the end of the taut rope. Hardly had he recovered from the shock when the other three were upon him. They came in a single file, expertly wielding the wet ropes, and each blow seemed greater than the last. The rough hemp cut through his shirt and his underwear and in a matter of seconds they were stripped from his upper body. A rope caught him under the armpits and he cried out at the sheer agony of it…”
Posted by Cullen Gallagher at 3:47 PM