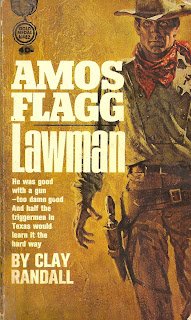 As Sheriff of Academy, Texas, it is Amos Flagg’s job to keep the drunks orderly and prevent the cattle drovers from shooting up the town. But when his estranged, outlaw father, Gunner, shows up in town with two gunmen, Amos knows it is only time before the trouble begins. And when it does, he will have to choose between family and standing up for the law he swore to protect.

Clay Randall was a penname used by Clifton Adams, who wrote many classic crime and Western novels including the Gold Medal classics The Desperado and A Noose for the Desperado. Randall’s series character was named Amos Flagg, and his first appearance was in Lawman (originally published by Gold Medal in 1964).

Betrayal and manipulation run deep in Academy, and Randall uses the plot design as a framework for a much deeper, more complex web of characters and conflicts. Even at the novel’s end, Randall smartly refrains from tying up all the loose ends. It not only leaves the reader eagerly awaiting the sequel, but it also stays true to the characters and their emotions. 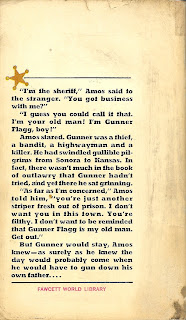 Randall writes with a hardboiled style – tough and gritty prose, and with characters that are short on speech and fast on the draw. But amidst all of this, Randall surprised me with the most unexpected character: El Cazador, The Hunter – Amos Flagg’s pet cat. As resilient, resourceful, and reserved as his owner, El Cazador appears every so often, sometimes getting in on the action, sometimes just getting in the way, and other times keenly observing the action take place, occasionally even taking over the narration for a few paragraphs. I’ve never been a fan of what you might call “cat books,” but Randall pulled off El Cazador wonderfully, never over doing it, and always with the deftest, most delicate sense of humor.

As is tradition on Pulp Serenade, some quotes from the book:

“A reddish, nightmarish mist swirled inside the bank. The floor had a tendency to tilt unexpectedly. The walls retreated and advanced in a startling fashion. German Hoyt loomed bigger than life, like some huge bear with one unraised arm, one dagger-studded paw ready to stab, crush, kill.”

“One thing about outlawing, it taught a man to stay limber. He couldn’t stop thinking or scheming – if he did he was done for.”

“Amos’s grin held all the mirth of a death mask.”

“What was peace, anyway, but a great silence, a void, an emptiness? Peace was a negative thing, an absence of disturbance. A vacuum. And one of the first things you learned, as soon as you were old enough to enter a schoolhouse – right along with the history of the Texas Republic and rules for spelling – was that nature abhorred a vacuum.”
at December 09, 2010