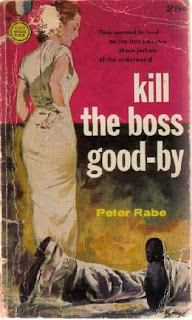 No one writes gangster novels like Peter Rabe. His lean, precise phrasing belies the rich characterization, political insight, and frequent humor of his prose. Rabe also has the unusual capacity to be bleakly cynical, darkly funny, and starkly violent, all at the same time. Kill the Boss Good-By is all of these, as well as a very entertaining crime thriller.

Kill the Boss Good-By, originally published by Gold Medal in 1956 and reprinted by Black Lizard in 1988, is an unpredictable whirlwind of vice, corruption, psychopathy, and horseracing. Thomas Fell is the boss, but when he goes missing, his underling Pander decides to make some big changes in the operation. Pander stops paying off the local officials, he allows some of the bookmaking offices to get raided by the cops, and he runs out some of the old timers and brings in a new crew. When Fell returns from his mysterious sojourn, he is crazier than ever, and determined to reclaim his territory at any cost. Meanwhile, The Combine in Los Angeles watches over them, waiting to see which man wins, and which man dies. 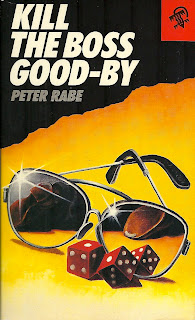 Despite having different characters, Kill the Boss Good-By and Dig My Grave Deep are close siblings. Both were published in 1956 and are concerned with the corrupt, concentric worlds of politics, big business, and the mob. The two books also proceed with the grim determination of their main characters, and their mental states set the pace for the stories. Here you can see Rabe’s background in psychology showing through. In Dig My Grave Deep, Rabe writes with calculated resolution because his protagonist, Daniel Port, isn’t the type to act hastily. In Kill the Boss Good-By, Thomas Fell is a lunatic who is recovering from a mental breakdown, so Rabe invests the narrative with Fell’s amplified irrationality. Erratic and volatile, Fell acts with increasing mania. Giving away clothes, early morning trips to the racetrack, sudden violence, and appearing totally oblivious in conversations, Rabe perfectly nails Fell’s psychological deterioration.

Bill Crider has commented that, “Rabe’s character names are always worth a second look.” Rabe clearly has fun with his characters in Kill the Boss Good-By. Take a look at this line and you’ll see what I mean – “I can’t lose,” said Fell. With a name like Fell, how can he not lose? And Pander is the perfect designation for a weasel trying to impress the higher-ups. 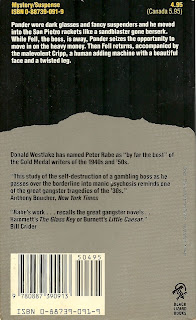 Kill the Boss Good-By stands apart from other crime novels written around the same time (at least the ones that I’ve read). Rabe is a true original, and he brings innovation and an inimitable voice to the book. Not only is there no hero, there isn’t even an anti-hero. We watch Fell with curiosity, amusement, and even a slight detachment. He’s wholly compelling, but not really sympathetic. We root for him because Pander is despicable, stupid, and greedy, but Fell is only slightly better. Fell’s increasing psychosis makes him all the more dangerous, and is impending downfall is unmistakable.

As is tradition on Pulp Serenade, here are two small quotes from the book that I particularly liked:

“You saw me throw out that cigarette. That’s the cure; you don’t care one way or the other.”

“You see a boxer with a beautiful nose and you got a fighter without heart.”
at December 21, 2010