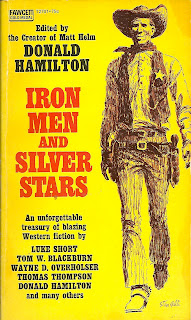 Donald Hamilton’s 1967 Gold Medal anthology Iron Men and Silver Stars collects 11 short stories and 1 essay from members of the Western Writers of America. It is a diverse collection, some stories leaning more towards action, others towards drama, and even the occasional comedy. Many were new stories for the collection, though a few were reprints, like Todhunter Ballard’s “The Mayor of Strawberry Hill,” from The Saturday Evening Post. Ballard’s story was actually one of the few that I couldn’t get into – it’s about a judge whose hasty and ill-thought decisions cause a town to run amuck. I could see there was supposed to be humor, but it missed me, and I couldn’t latch on to any of the characters.

Hamilton himself provides two of the best pieces. “The Great Tradition” is an essay that originally appeared in The Roundup, the WWA newsletter, in praise of Western writers like Zane Grey who captured his imagination as a reader, and who wrote damned good entertainment. It’s an essay that champions storytelling and imagination and unpretentious writing. Here is how it opens:

“They are trying to tear down Zane Grey. Little men with dry and scholarly minds who never followed the U.P. trail or rode with the riders of the purple sage by the light of the western stars are pursing their thin lips and saying that fifty-four millions copies are all very well, but it just proves you-know-what about the pubic taste, and after all, the man couldn’t write.”

Hamilton’s other contribution is the short story “The Guns of William Longley,” about a young gunfighter who returns home to find his intended has chosen a new man. When he steps out into the street for a duel, he feels that his guns are haunted by the ghost of their former owner, the notorious William Longley. It’s a terrific story in the vein of “The Man Who Shot Liberty Valance” that has a lot to do with the creation of Western myths and legends. 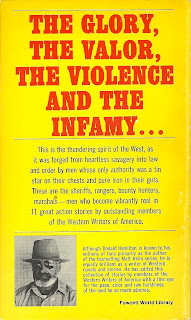 Another standout story was Luke Short’s novelette “The Hangman,” about a deputy marshal on the hunt for a bank robber. When the deputy pays an ex-girlfriend to single out the wanted man, he wonders whether the money will overcome her love for the outlaw. At the heart of the story is the complex moral code of the Old West, how the distinction between good and bad was never a clear line, and about the ethical vagaries when it came to standing up for the law and standing up for what is right. Many Western stories touch on these themes, but when done right they still resonate, and Luke Short does a terrific job. I also really enjoyed “Peace Officer” by Brian Garfield, about a jaded, one-armed sheriff who gets one last shot at redemption.

Perhaps my favorite story was from an author I had never heard of before, Carter Travis Young, called “Green Wounds.” It’s a suspense story about a mysterious young man who starts a conversation with the local sheriff but who knows a few more things about the sheriff’s shady past than he should. Introducing readers to new writers is one of the jobs of a good anthology, so I think that editor Donald Hamilton fulfilled his duty. Apparently Carter Travis Young also wrote a full-length novel for Gold Medal called Shadow of a Gun. I will try and track it down.

I should also mention the unique artwork by Stan Galli on the cover. I love this sketch of a sheriff – I don’t recall see many sketches on the covers of Gold Medal books, mainly just paintings.

Here are the full contents of the anthology:

And a couple of quotes that I liked:

“The years had reduced John Morgan to a kind of bookmark, which only marked the place where a great lawman had been.” – “Peace Officer,” by Brian Garfield