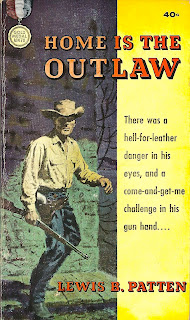 In Lewis B. Patten’s Home is the Outlaw, notorious gunman Morgan Orr has decided to trade in his irons for an honest living breaking cattle in his hometown of Arapaho Wells. But starting over isn’t as easy as it seems. No one in the town is ready to forget Morgan’s past; his girl has gone and married the local banker who harbors his own dark secrets that, if revealed, would send the town into a bloody uproar; and a number of young gunmen are anxious to lure Morgan back to his old life for their own shot at bringing down the infamous shootist.

The story becomes progressively darker as the narrative unfolds. There’s a real pulse to the story, and it quickens as the tension and drama increase, culminating in an exciting and frenzied finale. Patten’s characterization of mob violence is particularly frightening, but also insightful into human behavior, ranking right alongside Fritz Lang’s Fury.

The novel has a bleak worldview that crosses the border into noir territory in a number of ways. Foremost is the circular journey of a protagonist who runs from his past only to wind up back where he started, as well as the feeling of utter helplessness, that his downfall was predestined and out of his control. It wasn’t greed or lust or vengeance that drove Morgan Orr to the gun, but a fateful accident. The capacity for violence was always there, he just needed to be pushed. And try as he might, Morgan can never fully bury that impulse. 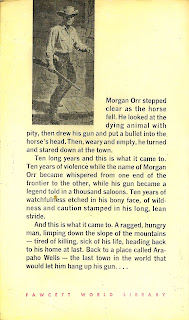 That’s only the tip of the iceberg – the deeper one looks at Home is the Outlaw, the more noir the story becomes. The whole town of Arapaho Wells, in fact, has that same violent streak running just below the surface. Once the skeletons start coming out of the closet, the town quickly erupts into a bloodthirsty mob. Hypocrisy and corruption are as second nature to these people as breathing, but perhaps they are just better at hiding it than Morgan. Or perhaps he’s just more honest about it. And it is this openness and self-knowledge that makes the Western anti-hero so appealing and so sympathetic, and also so timeless.

The motif of a youthful outlaw who comes home to make good but whose dark past follows him reoccurs in other Patten books, such as The Odds Against Circle L. Likewise, the major conflict in both stories are ignited by fractured families and the threat of hidden pasts coming to light. Morgan still hasn’t atoned with his alcoholic, neglectful father, and the feud between the brothers at the Circle L Ranch endangers the whole family and its business. While The Odds Against Circle L suffers from poor pacing, redundant details, and somewhat clueless characters, there are certainly redeeming elements to the book, one of which is this noir-ish tone that we also see (perhaps more clearly) in Home is the Outlaw.

Patten was born January 13, 1915 in Denver, CO. During the 1930s he served in the US Navy, and later worked as a ranch operator before turning to writing. He was a busy author, eventually publishing over 100 books and many short stories for publications such as Ranch Romances. To my knowledge, he only did 9 books for the Gold Medal imprint: Five Rode West, Gunsmoke Empire, Home is the Outlaw, Massacre at San Pablo, Rope Law, The Ruthless Men, Showdown at War Cloud, Top Man with a Gun, and White Warrior. Patten passed away May 22, 1981.

As is tradition on Pulp Serenade, a few quotes from the book that strike me as particularly noir:

“Broke and hungry, hounded and defeated, sick of the past and all the memories stored in the past. Would it be any different here?”

“By the time Morgan saw where his life was leading, it was too late.”

“Nothing was all bad, or all good either, for that matter. People were people, reacting to a lot of different things. Like fear.”

“He could see no hope, no future for himself. Even if he survived the night, even if he succeeded in turning back the mob, the events of the night would make it impossible for him to stay in Arapaho Wells. Hatred for him would be too strong.”
at December 04, 2010