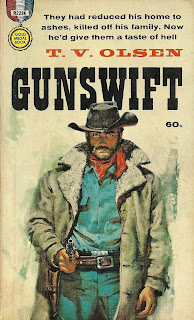 T.V. Olsen’s Gunswift gets off to a fast and tense start in media res as Owen Rutledge and Abner have already found the man they are looking for, Garvey. He was part of the notorious Tierney’s Raiders – a band of treacherous rebels left over from the Civil War – who murdered Owen’s family. As Owen and Abner track down the last remaining members, Sykes, and Tierney himself, they find themselves caught in the midst of a vicious land war that threatens to jeopardize their mission.

Published in 1960, Gunswift is equal parts amateur private detective story and revenge mission, all told in a post-Civil War Western setting. These two distinct styles show not only the strong connections between the Western and the Crime novel, but also how pliant and diversified the Western genre can be. 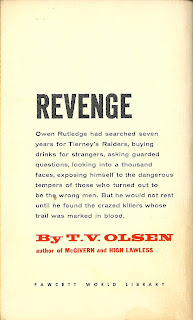 Tightly plotted with strong characters and historical details, Gunswift is solid Western entertainment. Olsen, whose family is Norwegian, was born in Rhinelander, Wisconsin on April 25, 1932. And while he would spend most of his life in his hometown, Olsen’s redolent eye for location and historical atmosphere is impressive. Whether it is the opening fight scene set on a mountain of rotting slate, trailing one’s horse across a canyon’s thin ledge, or a pitch-black mountain shootout, Olsen’s dynamic use of geography enhances the blistering action scenes.

Olsen’s West is also assembled from a diverse group of characters from all parts of the US – north and south, east and west – and from both sides of the Civil War. Much of the personal drama that made the story so compelling had to do with the lingering politics of the war, and how the characters negotiated new relationships where shortly before there was open hostility. Olsen doesn’t stand on a soap box and moralize about politics, nor does he easily demonize or heroicize any of his characters for the sides they chose. Instead, he’s much more interested in the human element and the ethical conflicts they have to work out for themselves. 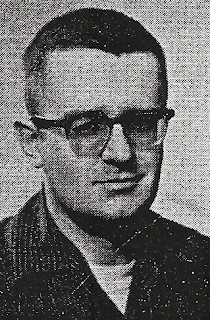 A prolific novelist, Olsen would eventually write a total of twenty one novels for the Gold Medal imprint including A Killer is Waiting, A Man Called Brazos, A Man Named Yuma, Blizzard Pass, Blood Rage, Bonner's Stallion, Brand of the Star, The Burning Sky, Canyon of the Gun, Day of the Buzzard, The Golden Change, Gunswift, The Hard Man, High Lawless, Lonesome Gun, McGivern, Ramrod Rider, Red is the River, Run to the Mountain, Savage Sierra, and Under the Gun. Theodore V. Olsen passed away July 13, 1993 at the age of 61.

“Strange how revenge thoughts grew to habit so dulled that a man could not yet be aware of the sharp exultance of journey’s end. As if its end were the end of everything…”

“The wind rattled skeletons of dead brush against the stable wall. Owen shivered.”
“Desperately seeking anew, he’d followed the American dream that was moving westward, and found only a brawling, dog-eat-dog frontier.”