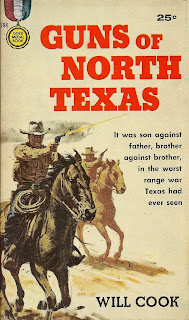 Will Cook’s Guns of North Texas (1958) opens with Lon Cordeen returning from the Civil War to his home in Elk Crossing, Texas. Upon arrival, he finds that his father (fittingly named Temple) and brothers (the older Paine and younger Hoby) are on a mission to lynch or run out of town everyone who is black or a Yankee. When he is asked to kill his sister’s fiance, Lon must reconsider the value of family and the cost of betrayal.

The book was well reviewed by Nelson Nye in the New York Times, who commented “The story has been told and told again, but Cook's harsh version discovers new meanings, an immediacy and humorless depth seldom achieved in pulpwood fiction.”

I wasn’t as enthusiastic about the book as Nye was. Lon is such a fair and understanding character that he tends to be unexciting. Even when he’s drawing a gun against his own cousins, he’s so sympathetic to his enemies that I would lose interest in what he was doing. Lon’s younger brother, Hoby, on the other hand, is a very compelling character. Hauled off to war while still a teenager, then forced into a lynch mob, and then dragged into a bloody family feud, Hoby ages faster than boys his age should. We watch him turn cynical and cold-blooded, and grow more intelligent and insightful into the best and worst parts of his family than Lon is ever capable of. Hoby would have been a much more exciting main character to focus on, and it would have pushed the novel more into the territory of something Harry Whittington might have written. 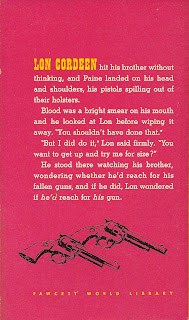 A quote from the book:

“You’re a dumb animal,” Lon said. “But how much of this can you take, cousin? You know what I’m going to do? I’m going to pound on you until your brains are scrambled and you’ll walk the rest of your life on your heels and every time you see me you’ll take off my hat and put it back on again; it’ll be the only thing you’ll ever be able to do.”
at December 04, 2010