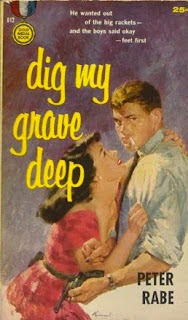 Peter Rabe’s Dig My Grave Deep is a hard-hitting story of political corruption. Gangsters, businessmen and politicians are indistinguishable from one another, and law and order are just signs that corruption is going smoothly. And the closest thing to a hero is a disillusioned mobster whose chief – and perhaps only remaining – virtues are that he doesn’t lie and that he can see the whole crooked charade for what it really is. But in a deceitful world of double-crossers, profiteers, and opportunists, an honest criminal is a rare friend, indeed. One worth killing, and maybe dying, for.

Daniel Port is a gangster who wants to get out of the rackets while he’s still alive. Max Stoker, his boss and slumlord politico, isn’t happy with the decision. Neither is Stoker’s political rival – Bellamy – who will do anything to get Port on his side to help crush Stoker and gain control of the territory. But Port isn’t one to sell out his friends so easily, so he decides to do Stoker one last favor and take care of Bellamy and his goons. Just one last job, and he’s out – if he can survive.

When he was at his best, Peter Rabe was one of the most distinctive and starkly original paperback writers of his generation. He writes with the same cool and calculated determination of his main character, Daniel Port. You think you know what Gold Medal books are like, then you come across something like Dig My Grave Deep and it throws you for a tailspin. There is none of the fevered impulses of Jim Thompson or Harry Whittington, none of the poetic melancholia of David Goodis, none of the sex fantasies-turned-nightmares of Gil Brewer. Rabe is a world away from all of that, and his characters occupy a world less driven by libido than it is by rational intellect. 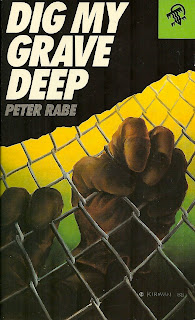 As a character, Port is, above all things, smart. And not just street smarts, either. He has a deep, cynical understanding of business and politics and the fraudulent façade that masks a world as dishonest and criminal as any underworld organization. What makes him valuable to Stoker and Bellamy isn’t just the backdoor dirt he has on everyone, but that he thinks strategically. Stoker is smart, but he’s also quick to jump to the wrong conclusion. Port instinctively sees plots and counterplots where others see the easy, wrong answers.

Like Port, Rabe has the ability to see through bureaucratic pomp and circumstance. Dig My Grave Deep is a political story that could take place in any arena – banks, government chambers, or business offices of any variety. You don’t have to look too far beneath the surface of Port’s story to see that Rabe is writing about capitalism as much as crime – though, for Rabe, there doesn’t seem to be much difference between the two.

This passage captures Rabe’s jaded but perceptive worldview. The cyclical pattern he describes is almost existential.

“I want out because I learned all there was: there’s a deal, and a deal to match that one, and the next day the same thing and the same faces and you spit at one guy and tip your hat to another, because one belongs here and the other one over there, and hell, don’t upset the organization whatever you do, because we all got to stick together so we don’t get the shaft from some unexpected source. Right, Max? Hang together because it’s too scary to hang alone. Well? Did I say something new? Something I didn’t tell you before?”

Think about that the next time you’re sick and tired of office drudgery. 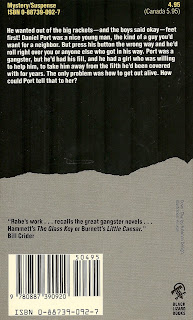 Before I make this sound too depressing, let me quote Bill Crider’s review from Mystery File: “What is unexpected in the book is its humor, of both the tongue-in-cheek variety (Rabe’s character names are always worth a second look) and off-the-wall variety (Port’s bodyguard is involved in several hilarious incidents).” I couldn’t agree more – especially about the “off-the-wall” variety, as some fight scenes have a wonderful slapstick edge to them. And there’s even something humorous about the political element to the story. Port seems to accept everything that is going on, and makes no attempt to stop corruption. In fact, he has no real problem with aiding the corruption – he’s just particular about who is in power and how contemptible they are. Better some crooks than others, seems to be Port’s view.

Dig My Grave Deep was originally published by Gold Medal in 1956. It was reprinted by Black Lizard in 1988, which is the edition that I read. It is, once again, out of print, but used copies of the Black Lizard edition aren’t too hard to find online.
at December 20, 2010