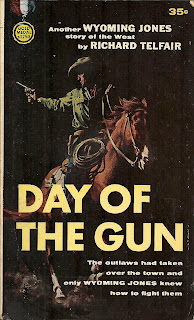 Richard Telfair’s Day of the Gun, the third and final entry in the Wyoming Jones series, is a lean and mean heist story, a cataclysm of Western action and suspense with a cinematic edge. All three novels (the first two are Wyoming Jones and Wyoming Jones for Hire) were originally published by Gold Medal in 1958. On page 1, Telfair drops the reader into the final stages of the heist set-up. All the players are in place, and while the outcome is still unknown, nothing can stop the inevitable violence and impending bloodshed.

Serret is a little town near the Mexican border, but it is about to become a battlefield when a Union regiment guarding a shipment of gold decides to pass through on their way East. Coming to ambush the regiment is a band of eight Confederate bandits, recently escaped from a Yankee prison. Also hoping to intercept the shipment is a mysterious rider in black, Glade Perrin. And then there are the Comanche warriors surrounding the town, ready for war. And on this day, former deputy Wyoming Jones is planning on taking the morning stage and leaving town – but fate seems to have different plans for the cowboy. 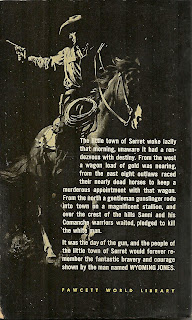 The book is exciting from first page to last, and Telfair skillfully switches viewpoints between the various forces in order to maximize suspense. The design and structure of the plot is terrific, and it plays out on the page almost like a movie, smoothly flowing from one scene to the next.

Even though it is the third novel in the Wyoming Jones series, one needn’t have read the others, as it works quite well as a standalone. There are references to the other books, but most of the book relies not on Wyoming’s backstory but on the impeccable organization of the action.

This third novel also puts Wyoming in a very different scenario than the first book. When we first were introduced to the character, he was on a quest to avenge the death of his mentor and father figure, Curly. His fierce and violent determination drove the plot forward. Here, in Day of the Gun, Wyoming has to keep his violent instincts at bay or risk setting off the outlaws that might retaliate by killing civilians. It was refreshing to see Telfair expand his series character by trying him out in a different scenario rather than just repeating what made the original book a success.

Here is one of my favorite quotes from the book, a stirring speech given by Wyoming Jones to the outlaws:

“They’ve let you take their horses. They’ve watched you kill their sheriff. They’re not going to take much more. Maybe they will stand for it – and maybe they won’t… I don’t know. But I do know that you can push people just so far – then they start pushing back. Sure I know, you’ve got the town under gun. You’ve got three women you threaten to kill if anyone makes a move against you – but listen, Bardley, you can push so far that people forget about their fears.”
at December 05, 2010