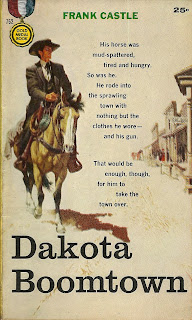 Jack Stuart is a Western badass. He rolls into Brule, Dakota Territory sleeping in the back of a grain wagon with only two dollars in his pocket. The first he gives to the wagon driver, and the second he gives to an old, toothless soak for directions to the saloon. Brass balls and an iron will, that’s what Jack Stuart starts with, and he aims to take control of the whole town. The townsfolk don’t know what to think. Jay Colter, owner of the Silver Slipper Saloon, doesn’t like it one bit. Nor does local tycoon Ed Murdock, who has his own plans for Brule and wouldn’t hesitate to kill anyone who stood in his way.

Frank Castle’s Dakota Boomtown starts with a bang – street fights, crazy gambling bets, hotel ambushes, and a penniless vagrant standing up to the richest, most powerful men in town. That’s how you get to know Jack Stuart. Castle sustains the mystery and excitement surrounding Stuart not only through increasingly daring situations, but also by withholding his intentions and motivations. We know he’s good with a gun, and he’s been on both sides of the law in the past. For much of the book he is equally capable of being the hero or the villain – perhaps that’s part of the anti-hero’s charm, that element of danger and surprise that he could easily flip sides at any given moment. All in all, it makes for a dynamic and engaging character. 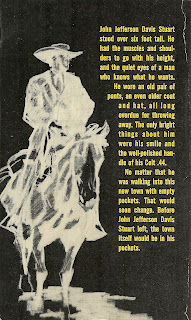 Another character that I really liked was Prudence, the nineteen-year-old girl who has to take care of herself and her drunken grandfather. She’s as rough, tough, and capable as any of the men in Brule, if not more so. When we first meet her, she is throwing rocks at Stuart for not getting out of her way. As the story progresses, we get to see her smart and ambitious business sensibility. It was great to see such an independent and enterprising young women in this Western novel. Hats off to Frank Castle for creating such a strong character. I wish he had written a sequel that followed her storyline – she could definitely carry a novel on her own.

Dakota Boomtown is tough and fast-paced with shades of Hammett in its grim portrait of the ruthless, dirty politics of the West. (I can see Hammett only in the plot, but not so much in the style, which isn’t so crisp and cropped.) I look forward to reading more of Castle’s Westerns, as well as his crime novels.

Frank Castle seems to be an enigmatic figure. He wrote several crime and Western titles for Gold Medal and other paperback publishers, but little is known about his life. Juri Nummelin of Pulpetti turned me onto Frank Castle, and he has written about Castle on his blog as well: one post about a novel that was only published in Finnish, and another that has bibliographic information. Mystery File also has an article about Castle.

Two quotes from the book I liked:

“There are only two kinds of men in this world, far as I’m concerned – those who leave me alone, and those who don’t.”

“A gun spoke suddenly, the sound of its explosion sharp in the creek timber to the southeast. A bullet flashed past Jack Stuart’s face so close that the wind of its passage seemed to lick at his cheek.”
at December 06, 2010