"Before She Kills" by Fredric Brown (Dennis McMillan, 1984) 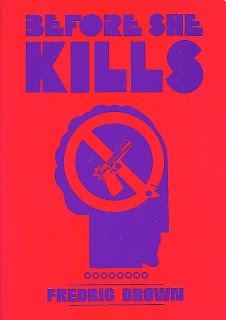 If there’s anything better than one Fredric Brown story, it’s several stories, and it doesn’t get any better than the Dennis McMillan collections. Before She Kills was the second volume of McMillan’s “Fredric Brown in the Detective Pulps” series. The first hardcover edition appeared in 1984, and the paperback (one of the few that McMillan issued for the series) appeared in 1986. William F. Nolan, noted scholar and author, was also a friend of Brown’s and wrote the introduction. “I found him to be a warm, quiet man with a wacky, pun-loving sense of humor,” remembers Nolan, “a sideways thinker who did all his rough-draft writing in his head.”

Nolan’s portrait of Brown should strike a chord with many writers. Before his first novel sold, he held down a day job to support the family and devoted the night to writing. Brown was, for years, a proofreader, and his intimacy with the English language shows through in his stories’ playful literacy.

The stories in Before She Kills span the gamut of Brown’s career, from 1940s pulps to 1960s digests, and they’re as madcap as they are magnificent. The consistent high-caliber of his stories is damned impressive, and it’s a blessing for fans of his work that he was so prolific. 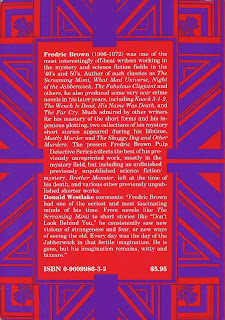 The title story, “Before She Kills,” is one of two stories in the collection to feature Brown’s series private investigators, the uncle and nephew team of Ed and Am Hunter. In this yarn, a husband desperate for a divorce hires Ed and Am to make sure that his wife tries to kill him. Their job? Make sure she doesn’t succeed. It’s a terrific story that is characteristic of Brown’s sly ability to twist an archetype into something totally bizarre and original. Ed and Am’s other appearance is in “The Missing Actor,” about a thespian with a fondness for gambling who takes a powder with his father’s money.

My favorite story in the collection is “A Cat Walks,” originally published in the April 1942 issue of Detective Story Magazine. How’s this for an opener? “It all started with one cat, one small gray cat. It ended with nine of them. Gray cats all – because at night all cats are gray – and some of them were alive and others dead. And there was a man without a face, but the cat’s didn’t do that.” Brown is firing on all cylinders on this tale – a detective story with nightmarish illogic, a hint of surreal horror, and topped with a wily sense of humor.

In “A Date to Die,” a mystic (one of Brown’s favorite subjects) calls the police to report a murder that he commits while on the telephone. “A Mad Dog!” is about an alcoholic playwright who visits a doctor who specializes in experimental treatments for alcoholics, and winds up chasing an escaped homicidal lunatic through the night. And in “Handbook for Homicide,” Brown delivers a splendid twist on a variety of mystery archetypes. Take an old dark house, fill it with a bunch of astronomers, toss in some poisonous snakes, add a locked room murder, and top it off with a torrential rainstorm. With Brown behind the scenes, the possibilities are limitless with this one. It’s another short story classic from Fredric Brown.

Here’s a funny quip from “A Handbook for Homicide” that I’d like to close with: “I’ve been wet before and it hasn’t hurt me. I’ve been sober, and it has.”

This is among the more affordable McMillan volumes, and it is well worth tracking down.
at December 17, 2010