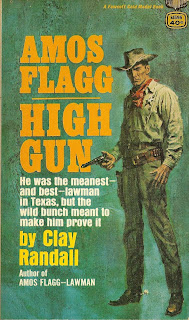 Sheriff Amos Flagg returns with his outlaw father, Gunner, and his extraordinary cat, El Cazador the Hunter, in Amos Flagg – High Gun. Originally published by Gold Medal in 1965, this novel opens with the lingering question of whether or not Gunner has truly reformed. When Gunner takes off for Indian Country with a newspaperman from the East, Amos begins to suspect his old man is up to no good. And when he hears rumor of gunmen corralling on the outskirts Sangaree County, Amos knows that Gunner must be involved somehow.

Written under the penname “Clay Randall,” Clifton Adams seems to have hit his stride with Amos Flagg – High Gun. It’s an easygoing and very entertaining book to read, with more humor than the first book, Lawman. I actually enjoyed this one even more than Lawman. The plot was more original, and this time around Adams gives more space in the book to Gunner. His goodhearted-but-crooked logic was charming and didn’t get old. If this had been made into a movie, Walter Brennan would have been perfect for the role. 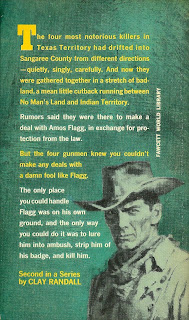 It’s interesting to compare this to Adams’ early Westerns. The Desperado and A Noose for the Desperado were books with tormented characters in a world as harsh as the desert landscape. Written nearly fifteen years later, High Gun has a patience, maturity, and humor that seems to come with experience. The cast of characters is fully formed, and Adams relishes their individual sensibilities and allows them the time and space to be themselves.

“For a moment his hope turned as cold as the void in his gut.”

“Don’t try to pass your misery on to others. Likely they had troubles enough of their own.”

“The young man’s face was unnaturally dark with the kind of dirt that a man didn’t pick up in any common way over an ordinary span of time. This was dirt of months and years, mingled with the smoke of a thousand hurried campfires. It was ground into the skin, into the pores. It lent depth and hardness to the scarlike lines about his mouth and eyes. It gave his face a slablike, masklike appearance. Amos had seen the look many times before, the look of an outlaw on the run.”

“El Cazador was a great believer in the philosophy of passivity. He sighed a cat sigh, yawned, stretched, and settled again for sleep.”

This was reprinted by Belmont Tower Books in 1973, and I have a copy of that edition, as well. The pagination is the same, just a different cover. I like both, so I’m including a scan of it below, as well. 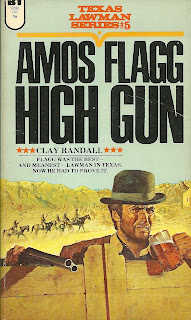 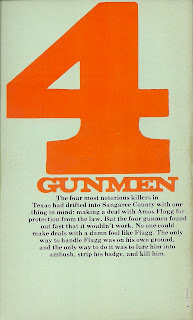 Posted by Cullen Gallagher at 2:34 PM