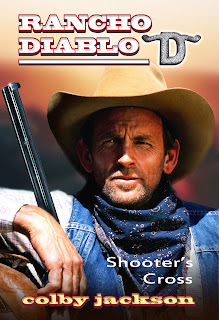 A new Western series is here -- Rancho Diablo! A collaboration between writers Bill Crider, James Reasoner, and Mel Odom, and featuring artwork by Keith Birdsong, the Rancho Diablo series will center around main character Sam Blaylock. The first book, Shooter's Cross (published under the house name "Colby Jackson"), is now available in print and as an ebook. One of Rancho Diablo's collaborators, Bill Crider, was kind enough to answer a few of Pulp Serenade's questions about his latest endeavor.

Pulp Serenade: Can you tell us a bit about your cohorts in Rancho Diablo and how you all came together?

Bill Crider: The Rancho Diablo crew is me, James Reasoner, and Mel Odom. Mel is the driving force. He's very into the e-book market, and he thought we should get into it as soon as we could. He thought it would be fun to do something in the spirit of the old pulps. Instead of, say, THE RIO KID WESTERN MAGAZINE, we'd have RANCHO DIABLO WESTERN MAGAZINE, and instead being a print magazine, it would be an e-publication. Mel knew that James and I were big fans of the fiction in the pulps, so he asked what we thought. We thought it was a great idea, and we jumped at the chance to be part of it.

PS: How did you all come up with the main character of Sam Blaylock?

BC: This was a group project from the beginning. We used e-mail to bat around ideas, and everybody contributed. Mel originated the concept, and then we hashed things over until we had characters and a setting that everybody liked. I think I've saved all the e-mails for posterity.

PS: How are you all splitting the writing duties for the Rancho Diablo books?

BC: Mel wrote the first one, James will do the second, and I'm in line to do the third. The idea was that sometimes we might do just a short story instead of a novella, and who knows what might happen as we go along? I'm eager to read James's contribution. After I do mine, we'll see where we stand, and if things are working out, we'll keep going.

PS: Is there a story behind the house name "Colby Jackson" that is attached to SHOOTER'S CROSS?

BC: That's the same story as above. We went over everything together, including all the names, locations, and so on.

PS: Can you divulge any hints about the upcoming books? There’s an advertisement for the next one, HANGROPE LAW at the end of the first book.

BC: Well, I have James's plot summary right here, but I haven't see the completed story, so I don't want to say much. Sometimes an outline and the final product differ considerably. I'll just say that you can count on some more action, some more good writing, and some complications in the relationships with characters from the first episode. This time some of Sam's kids will be involved.

PS: I know you're a big fan of gators and they appear frequently on your blog. Any chance of a gator cameo in a Rancho Diablo book?

BC: I'm not sure gators got up to that part of Texas in the 19th century, but you never know what somebody (namely me) might do.

PS: What is the most fun part of the Rancho Diablo project for you?

BC: Since I haven't written my story yet, I had the most fun during the planning. Mel and James are great to work with, and they're both pretty funny guys. So we had some laughs and we got a lot done at the same time. Which is always fun.

PS: Lastly, what’s up next for you?

BC: There's a big secret project that I'm connected with, along with a few other writers. All will be revealed soon. Of course I'll be working on my Rancho Diablo story soon, too. Next year there'll be another Sheriff Dan Rhodes book, THE WILD HOG MURDERS. And there's always my world-renowned blog [Bill Crider's Pop Culture Magazine]. I keep pretty busy for an old guy.