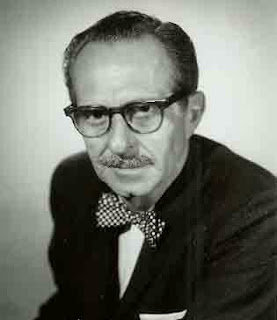 So, what did the critics make of someone like Day Keene back in the day?

This is the first in what I hope will become an ongoing series of explorations into criticism on classic writers, and how their works were received in their own time. For my first posting, I chose one of my favorite novelists: Day Keene (real name Gunard Hjerstedt).

When going through newspaper archives online, I was surprised by how often Day Keene’s work was reviewed in the New York Times. What wasn’t surprising was that it was mostly the work of Anthony Boucher, one of the most famous and important mystery reviewers of the 20th century, and perhaps one of the best critics in general. His reviews may have been short, but they were unerringly perceptive, and often pretty damn funny.

The one thing that kept popping up from review to review was the amount of sex and violence in Day Keene’s books – apparently the critics were sufficiently shocked enough to warn readers in advance. Oh, Gunard…

Without further ado, I am handing things over to the critics!

Framed in Guilt: The story is a great deal better than the atrociously punning title might lead one to hope. –Unsigned (New York Times, Jan 16, 1949)

Joy House: A bit more conventional than usual… but the story of a murderer on the lam who seeks concealment in a curious sexual alliance is well constructed and sharply twisted in the James M. Cain manner. –Anthony Boucher (New York Times, Jul 25, 1954)

Who Has Wilma Lathrop? Day Keene manages to treat a vivid and violent plot with unusual restraint and quietly convincing realism… Sex and brutality are here integral to the plot and handled with skill and taste, and the writing, in characterization, prose and movement, is the best I’ve read from the always interesting Mr. Keene. –Anthony Boucher (New York Times, Jul 10, 1955)

Bring Him Back Dead: It’s all somewhat oversexed and oversimplified, but fast and concise. –Anthony Boucher (New York Times, Oct 21, 1956)

Passage to Samoa: Combines murder-mystery with the unfailing appeal of ship-wrecked treasure in a lively and enjoyable adventure tale, in which the copious lashings are necessary to the plot. –Anthony Boucher (New York Times, Jan 18, 1959)

So Dead My Lovely, Dead Dolls Don’t Talk, and Take a Step to Murder: Day Keene, recently elected Vice President of M.W.A. for Southern California, has come out with three novels within a matter of weeks… and all are worth reading if you’re not shocked by explicit sexual detail or offended by lapses in taste or careless writing. Keene invents good strong plots, in something like the Williams-Thompson tradition if with less subtlety, and tells them vigorously; but his crudities are sometimes tiresome. I have the impression that Keene was writing better books a few years ago, and the conviction that he’ll be writing still better ones in the future–there’s a lot of unguided talent here. –Anthony Boucher (New York Times, May 10, 1959)

Too Hot to Hold: It’s all a mite too Mittyish, but told with an ease and a speed that are hard to resist. –Anthony Boucher (New York Times, Dec 6, 1959)

Too Hot to Hold: Short, simple, well-written little New York thriller about unhappily married ad-man who stumbles on $200,000 being carried for gangster by lost girl Linda. Chase, passionate love affair and rather a lot of torture. –Maurice Richardson (The Observer, Jan 8, 1967)

Chautauqua: Not all of this first novel by Day Keene and Dwight Vinson is quite that heavy. There is a great deal of good humor, and probably a dose of nostalgia for provincial senior citizens. … The prose is steady, with the viewpoint shifting form person to person like an intelligently handled movie camera. (Both the authors are veteran Hollywood and TV alumni.) “Chautauqua” is good swift melodrama. It belongs somewhere between “Payton Place” and “Winesburg, Ohio.” –George Lea (New York Times, Mar 26, 1960)

World Without Women (with Leonard Pruyn): Keene and Pruyn do an excellent job of sustaining interest and suspense. “World Without Women” is a paperback original, but in entertainment it is a good deal richer than many a hard-cover novel. –Robert R. Kirsch (Los Angeles Times, May 27, 1960)

Payola: Familiar enough in its sex and violence and in its expose of criminous goings on in the pop-record business; but it’s fast, lively and professional, and Irish-Hawaiian Johnny Aolha is better company than many of ficiton’s private eyes. –Anthony Boucher (New York Times, Sept 4, 1960)

Bye, Baby Bunting: The terror and tribulations of Jennifer’s giving birth to her first child–in prison–and then standing trial for her life, are presented in spade-calling terms that may dismay the queasy. –Vivian Mort (Chicago Tribune, June 30, 1963)