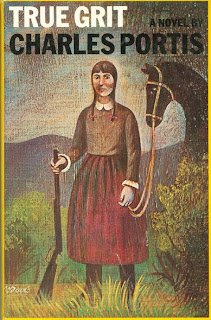 Recently I read Charles Portis True Grit. It is a classic that, to me (at least), lived up to all the hype. Though I haven't seen the John Wayne movie yet, I'm looking forward to watching both it and the upcoming Coen Brothers adaptation.

I found the most enchanting aspect of the book to be the voice of the narrator, 14-year-old Mattie Ross who has as much vengeful pride as Mike Hammer. She leaves home in search of her father’s killer and enlists U.S. Marshall Rooster Cogburn in her quest. Her unnatural naturalness for storytelling makes her a perfect narrator. By that I mean her enthusiasm for narrative sometimes gets the better of her. She tells the story not like a professional novelist, but like someone who was actually there (which she was). Her digressions and personal opinions sometimes distract her from the plot, but these are moments to be treasured.

A seemingly simple observation such as, “It had a good roof” (from the first page), becomes magical through Mattie’s voice. Mostly because other writers would forget to include a detail like this. Then there is her disapproval of Rooster’s accounting, her haggling with businessmen (and winning!), and her play-by-play commentary on the search. She’s a bright young woman, more so than Rooster wants to admit at first, but even by the end he is charmed by her perseverance, intelligence, and bravery. 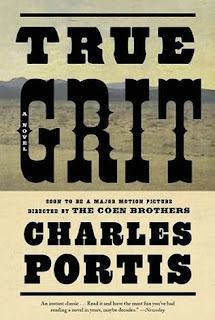 Another aspect of the narration I really liked was how there were these brief moments when the adult Mattie would shine through. Chance references to something happening later in life. Not enough to let you know where she is when she is writing the book, or what has happened in her life since the story happened, but just enough to let you know that her wonderful 14-year-old soul never disappeared.

Here is the first paragraph of the book, which roped me in when I read it in a bookstore while visiting Boston:

“People do not give it credence that a fourteen-year-old girl could leave home and go off in the wintertime to avenge her father blood but it did not seem so strange then, although I will say it did not happen every day. I was just fourteen years of age when a coward going by the name of Tom Chaney shot my father down in Fort Smith, Arkansas, and robbed him of his life and his horse and $150 in cash money plus two California gold pieces that he carried in his trouser band.”

Mattie Ross is now one of my favorite narrators. Who are yours?
at October 06, 2010