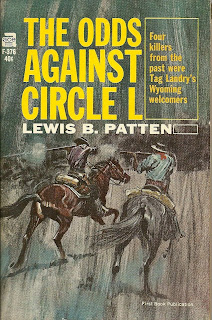 Lewis B. Patten’s The Odds Against Cirlce L is a Western published by Ace Books in 1966. Dig that wrap-around cover! The fight that starts on the front cover continues onto the back.

The main character is Taggart Landry, a man haunted by his criminal past with a gang. Now he is returning home because he heard his father is dying. Neither the town nor his brother can forgive Tag for running out on his family, and he’s scared they’ll find out the real reason he fled. When his former gang shows up, Tag is caught between running again or facing his past.

Despite a driving scenario and intriguing main character, The Odds Against Circle L has its share of problems. Patten seems to repeat certain information and observations, much of which was rather obvious to begin with. The main character also seems a little naïve, particularly when it comes to the gang’s blackmail scheme. These flaws slow down what would otherwise be a pretty fast-paced story. 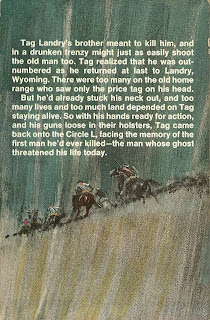 Still, Patten has some great lines in the book, and the story was interesting enough that I have already bought some of his other books, which I am looking forward to reading.

Here are my favorite lines:

“In Tag, suddenly, there was only fury, pure, undiluted rage. In his mind was a picture of his father, and of Sierra smiling, smiling, the gleaming knife in his hand…”

“But he’d started it and he had to fight. He had no other choice. No other choice. He was getting tired of hearing those three words, even from himself.”

“He felt as a man must feel the instant after he dives off a cliff. There was no retreating, no going back. He was committed, for better or for worse.”
at October 07, 2010