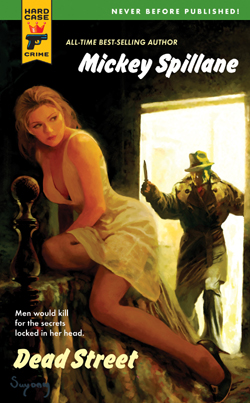 Great news about Hard Case Crime! The great crime wave will continue with Titan Books beginning in September and October 2011 with Max Allan Collins' Quarry's Ex and Christa Faust's Choke Hold, as well as two "secret" novels that have yet to be announced.

To those of you who, like myself, wondered about the backlog of Hard Case titles, Titan will be distributing the rest of the Dorchester stock that have already been printed.

See the official press release below for more information.

Hard Case Crime has won praise from dozens of major publications ranging from Time, Newsweek and The Atlantic Monthly to Entertainment Weekly, Playboy and Reader’s Digest, and has been featured on CBS Sunday Morning, NPR’s Fresh Air, and in every major newspaper in America (including repeated coverage in the New York Times, Los Angeles Times, Washington Post, and USA Today).

First launched in 2004, Hard Case Crime published 66 titles through August 2010, at which time its long-time publisher, Dorchester Publishing, announced it was exiting the mass market paperback publishing business after nearly 40 years. After receiving offers from five other publishers (including two of the largest in the world) to continue the line, Charles Ardai selected UK-based Titan Publishing as Hard Case Crime’s new home.

“Titan has an extraordinary record of creating beautiful, exciting books with exactly the pop culture sensibility that Hard Case Crime exists to celebrate,” said Charles Ardai, founder and editor of Hard Case Crime and an Edgar Award-winning mystery writer himself. “Titan is one of the few publishers that loves pulp fiction as much as we do.”

Titan’s first new Hard Case Crime titles, scheduled to come out in September and October 2011, include QUARRY’S EX, a new installment in the popular series of hit man novels by “Road to Perdition” creator Max Allan Collins; CHOKE HOLD, Christa Faust’s sequel to her Edgar Award-nominated Hard Case Crime novel MONEY SHOT; and two never-before-published novels by major authors in the crime genre (both recipients of the Grand Master Award from the Mystery Writers of America).

“Hard Case Crime has done a remarkable job in a very short time of building a brand known for outstanding crime fiction and stunning artwork,” said Nick Landau, Publisher of Titan Books and CEO of the Titan Publishing Group. “We are thrilled to partner with Charles and look forward to bringing Hard Case Crime to a wider audience around the world, not only through the novels themselves but also through an innovative merchandise program.”

Charles Ardai founded Hard Case Crime in 2004 through Winterfall LLC, a privately owned media company responsible for a variety of print, film, and television projects. The series has been nominated for and/or won numerous awards since its inception including the Edgar, the Shamus, the Anthony, the Barry, and the Spinetingler Award. The series’ bestselling title of all time, The Colorado Kid by Stephen King, was the basis for the current SyFy television series “Haven,” on which Charles Ardai works as a writer and producer. There have also been a number of feature film deals involving Hard Case Crime books, including “The Last Lullaby,” based on The Last Quarry by Max Allan Collins and starring Tom Sizemore as the titular hit man, and more recently Universal Pictures’ purchase of the film rights to Little Girl Lost and Songs of Innocence by Richard Aleas.

Titan Publishing Group is an independently owned publishing company, established in 1981. The company is based at offices in London, but operates worldwide, with sales and distribution in the US & Canada being handled by Random House. Titan Publishing Group has three divisions: Titan Books, Titan Magazines/Comics and Titan Merchandise. In addition to fiction, including novelizations of films such as Terminator Salvation, original novels based on TV shows such as Primeval and Supernatural and the popular computer game Runescape, and the celebrated Further Adventures of Sherlock Holmes series of novels launched in 2009, Titan Books also publishes an extensive line of media- and pop culture-related non-fiction, graphic novels, art and music books.
at October 22, 2010