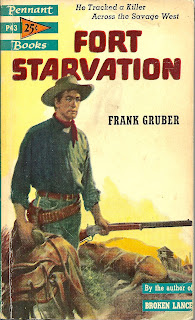 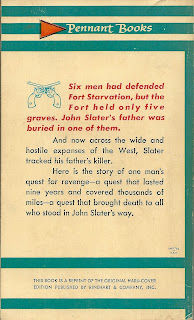 “A week ago Slater had been riding toward the hills. His eyes had been so intent on them that he had scarcely been aware of the green valley through which he passed. His eyes were only on the hills ahead. They were bleak and forbidding. They seemed to have been created by a gigantic hand that had torn up huge handfuls of earth and rock and tossed them down willy-nilly, as if in anger or spite. There was no rhyme or sense to it. Gullies ran here or there, as often as not ended against blind walls of rock.”
at October 04, 2010