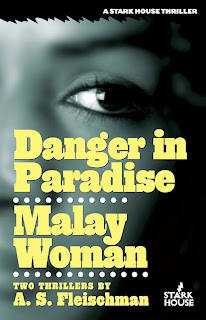 A.S. Fleischman may have passed away this past March at the age of 90, but Stark House Press is helping to preserve his legacy and ensure that future generations will remember the name and understand his success, importance, and artistry as a writer. Winner of the esteemed Newbery Medal in 1987 for The Whipping Boy, Fleischman had a long and prosperous career writing books for young readers. But his career is more varied than that: he was also a biographer, a screenwriter, a magician, and an Edgar-nominee.

Fleischman was also one of the original Gold Medal paperback novelists in the early 1950s. Two of these novels – Danger in Paradise (1953) and Malay Woman (1954) – are reprinted in the latest Stark House collection. Both are South Seas thrillers (Fleischman’s specialty for Gold Medal), filled with intimate first-hand knowledge of the areas stemming from the author’s first-hand experience in World War II. Accompanying the novels is a candid introduction by the author, as well as a moving, comprehensive tribute by David Laurence Wilson, one of the leading authorities of the unsung heroes of American literature, particularly the early paperback writers. 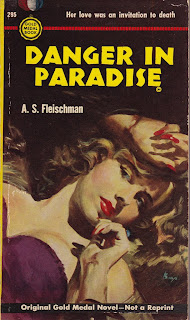 From page one, Danger in Paradise is a kinetic, epic adventure that moves fast and punches hard. Jeff Cape is an American oil engineer working in Indonesia. On his way back to the US, he stops for a drink and makes the mistake of noticing a mysterious, beautiful woman, Nicole Balashov. He then makes the bigger mistake of agreeing to carry a business card with a cryptic memo back to the states. The card belongs to Apollo Fry, President of Scrap Metals Export Co., and Fry would kill to get the secret message back.

Soon Cape finds himself on the run from Fry and his army of natives; Mr. Chu and his poisoned-talon bird Jong; a persistent stalker with a cane that doubles as a sword; and an alluring but deadly woman named Regina Williams. The only person that isn’t chasing him is the one he can’t find, and the one who can answer all his questions: Nicole Balashov.

The chases in Danger in Paradise are swift, the plotting succinct, and the twists plentiful. Like many of the best Gold Medalists, Fleischman didn’t waste words, and his precision with words is something to be admired. 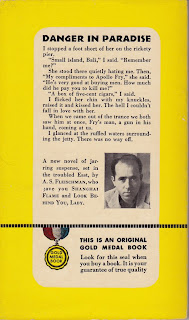 Though it takes second billing, Malay Woman is one double feature worth sticking around to the end for, as it is even more enjoyable than Danger in Paradise. The main character in this one is Jock Hamilton, another American in the South Seas who this time works with rubber plantations. On the run and suspected of killing his wife, Jock hides as a stowaway on a boat that seemingly offers an escape. He couldn’t be more wrong.

After he overhears a plot to kill a woman named Kay Allison, he tries to warn her but soon realizes that by saving her, he might compromise his own safety and anonymity. When they dock in Kuala Tang, Jock must figure out how to save Kay while hiding out from the police with an old friend, Gabriel Wing, and his wife, Monique. But can he trust Gabriel and, more importantly, can he trust himself around the seductive Monique? 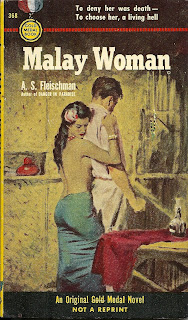 A simple sentence like this exemplifies Fleischman’s expertise: “It was hot. It was hot and fatigue was beginning to catch up with me.” The repetition of the first three words conveys the sense of fatigue and strain felt by the main character even before he says it. The heat even seems to weigh down on the readers, slowing the eyes, and making the fatigue infectious. Fleischman brings the same immediacy to the action and chase sequences, of which there are many.

From ship to shore, Malay Woman is filled with powerful details about the local and landscape and culture that distinguish Fleischman’s writing as first rate. Despite the exotic setting, Fleischman doesn’t give in to colonialist clichés, and the book holds up very well over half a century later.

Thanks for publisher Greg Shepard and his cohorts at Stark House Press, forgotten classics like these are being preserved and made available for future generations. 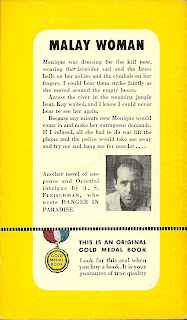 As always, a few of my favorite passages from both books.

From Danger in Paradise:

“I had a couple of hundred dollars in my wallet and two suitcases on the ship. My worldly possessions. The memories don’t count, I decided bitterly.”

“She was in trouble, and she had passed it on to me like an infection and standing here in the rain I didn’t give a damn.”

“The still water raced up for me. My feet shattered the surface, and the sea closed around me. I sank like a plummet and thrashed to stop myself. A shock of coolness swept over me and I floundered in a sort of violent slow motion. I rose along the monstrous white belly of the ship, almost luminous in the clean, deep water. I broke through the surface and gulped for air.”

“It came to me in a rush that murder had begun to cling to me like so many leeches.”

“It glinted off the kris handle that rose like a marker out of Ahmad’s young back. A monitor lizard as long as my arm scurried out of the light. A praying mantis was startled from the white streaked body and vanished in a green flutter. I bent down and saw streams of white ants ignoring the flesh and feeding at Ahmad’s sandals, his belt, his cheap watch band. The mantis had been lured by the ants, the lizard by the mantis. Death was always a nightmare in the jungle.”