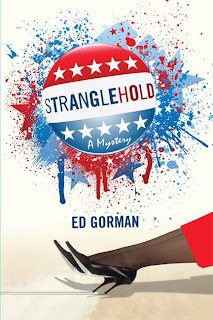 Dev Conrad is that rarity among literary characters, a warm narrator whose inimitable voice quickly becomes as familiar as an old friend. And if you’ve read Ed Gorman’s first novel about Dev, Sleeping Dogs, then the reunion in Stranglehold is all the more joyous.

As the Stranglehold opens, political consultant Dev Conrad has been called away from his home base to intervene in the campaign of one of his company’s clients, Congresswoman Susan Cooper. She’s been acting out of character, disappearing mysteriously, but she refuses to tell anyone what is going. With her reelection on the line, it is up to Dev to get to the bottom of things.

Cooper’s campaign and personal life quickly begins to fall apart. First Dev follows Susan to a crummy motel room and discovers blood around the room, as well as the business card of a ruthless political consultant. Next, he finds himself being questioned for the murder of someone that might have been involved with Cooper’s rivals. And Natalie Cooper, Susan’s tyrannical mother, is very unimpressed with the skeletons that Dev is dragging out of the family closet.

Gorman is a humanist in the tradition of Margaret Millar. Both draw readers in with their strong, tightly-plotted mysteries. However, the real treasure of their books is in their ensemble of characters (even the minor characters are treated with the utmost respect and craft), and in the maturity and acuity of the writers’ voices. Dev’s patience and hardboiled insight embodies so much of what we’ve come to admire in Gorman’s own writing.

Dev wants to see the best in people, but he is wise and weary enough to see the worst, and to recognize that people are human and they make mistakes. But what makes him trustworthy is that he is even quicker to spot his own weaknesses and errors. This blend of idealism and realism is what makes Dev such an endearing persona – he is never looking down at those around him, and never looking but, but always looking them right in the eye. And when another character returns that look – now those are special moments. Many of them involve Gwen – naïve, well-meaning, and brave, and who was unwittingly drawn into the Cooper campaign chaos; and others involve Ben, Dev’s colleague, another fallen idealist with plenty of regrets about failing his own family, with whom Dev shares an unspoken bond.

Gorman doesn’t just write stories, he puts them in worlds in which many stories are colliding. The book you’re holding just happens to contain a couple. Here is an example: Dev spots a mother in a Toby Keith t-shirt, her husband in a NASCAR shirt, and a chubby child. Their clothes are ratty, and their car is in worse shape. There’s almost a hint of caricature in Dev’s observation – until he notices the husband’s limp, and the wife’s attempt to help him. “It was the sort of thing that could break your goddamned heart because it was so simple and loving and said so much about their years together. They were playing a shitty hand, one the dark Lovecraftina gods were probably still laughing about, but they were bound up and redeemed by their loyalty.”

In these politically divisive times, we need a hero like Dev Conrad. Someone who’s concern goes beyond party lines, and who can see beyond all the campaign and media hoopla. Heck, I’d vote for Dev, but I think he’s too smart to run. In the meantime, I eagerly await the next installment in Ed Gorman’s latest series.

As always, here are a few of my favorite quotes from the book. Gorman has some really wonderful turns of phrases, and shows a real love of language.

“Fog rolled down the streets on my way to foundation headquarters. Streetlights were dulled by ghosts and stoplights burned like evil eyes through the mist. A long stretch of fast-food places shone like a cheap carnival midway in the rolling clouds. And always there was the relentless cold rain, gutters and intersections filling up fast.”

“After my years in army intelligence, when I’d functioned pretty much as a detective, I’d thought about joining a police force somewhere. I’d spent three nights in a squad car riding around Chicago. The dangers I’d seen were tolerable; there’d been moments when they’d been exhilarating. But the heartbreak was what I couldn’t handle. The beaten wives and the forlorn children, the sad junkies, the prisons of poverty, the fear of people afraid to walk the streets of their own neighborhoods. I didn’t have the gut for it.”

“Then she started her awkward, belly-bumping slide out of the booth. I was thinking how good it would be when my own daughter was pregnant. I had so much to make up for. I wanted to do it right this time.”

“And no, it wasn’t the drinking; it was the fact that I spent so much time away from home working on campaigns. I wasn’t faithful and neither was she. She had a good excuse for it, I didn’t.”
Posted by Cullen Gallagher at 8:29 AM